Soon All Hallows Eve is nigh, and we’re asking: What are you doing on this spooky evening? Playing some spooky, thrilling slots, perhaps? Whether you’re going to be wrapped up warm, next to the fire or out and about in the twilight, trick or treating, there’s definitely some spooky fun to be had if you’re planning some casino entertainment on Halloween night.

The team at All Gambling Sites have come up with a slots guide which is perfectly suited for Halloween. See it as your personal casino slots playlist if you like. All the slots in our guide come from a variety of different casino games providers, such as Netent, Microgaming, Barcrest and Playtech, and they’re all creepy, thrilling, spooky and fun and totally in the right vibe for Halloween! What's more, you can also get some treats of your own by playing at our recommended casinos as well! Now... the clock is ticking and here’s the Countdown to the best Halloween Casino slots of all time, and where’s best to play them!

Which are The Best & New Halloween Slots for 2019? 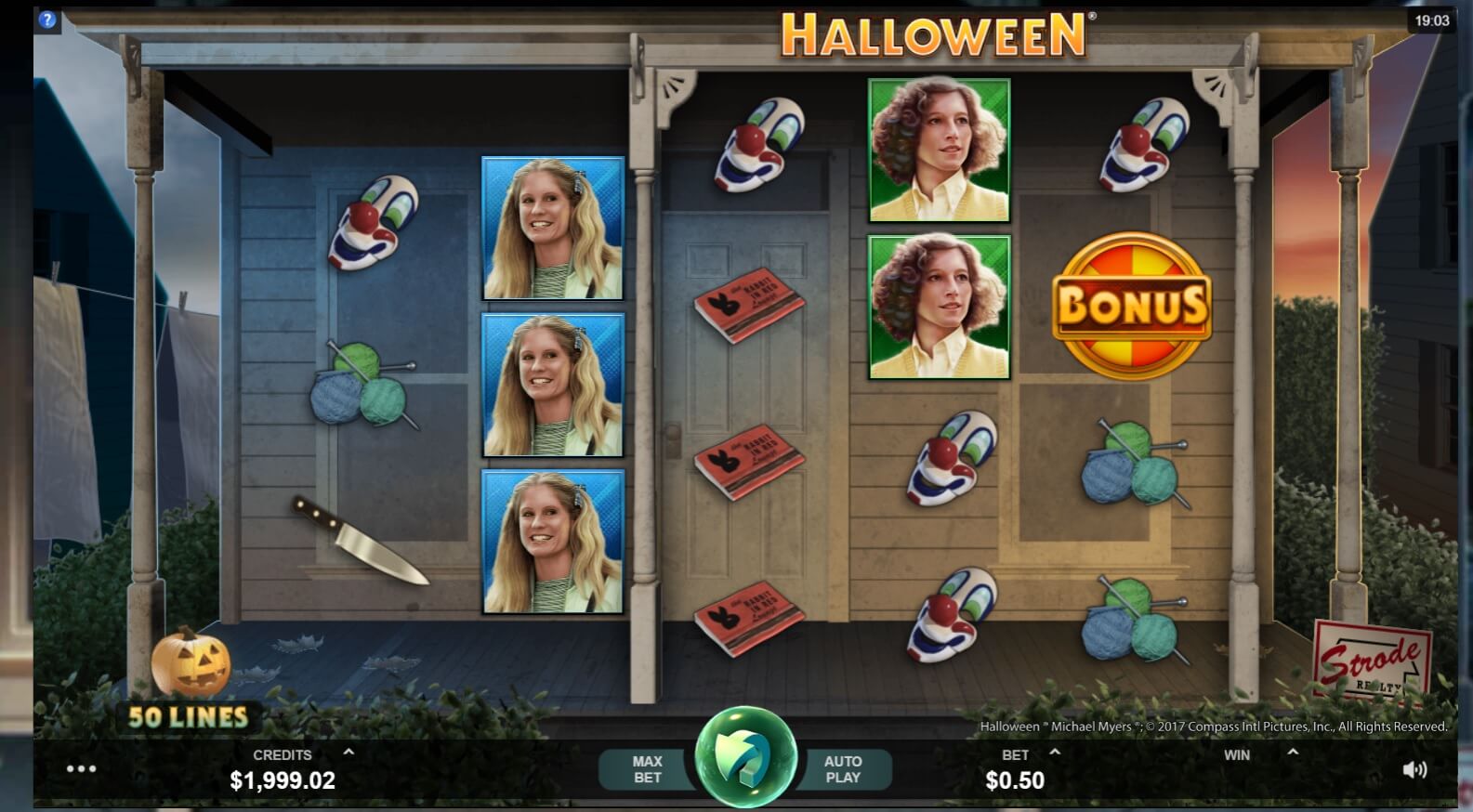 We were surprised to learn that Microgaming were launching a new Halloween themed slot that's based on the 1980's film franchise of the same name. Yeah...remember those frightening films back then? Now there's an official 'Halloween slot' available to play this year which will well and truly take you back to the 1980's.

The game has a few interesting features, including the "trick or treat" wheel, and although we were a little disappointed that we didn't see Michael Myers that many times, this slot is well worth a spin!

It did remind us to watch the films but we're thinking they might be classed as comedy and not horror these days, as this slot isn't scary it's just fun and nostalgic! You can read our full Halloween Slot review here or play the game now at our recommended casinos below! 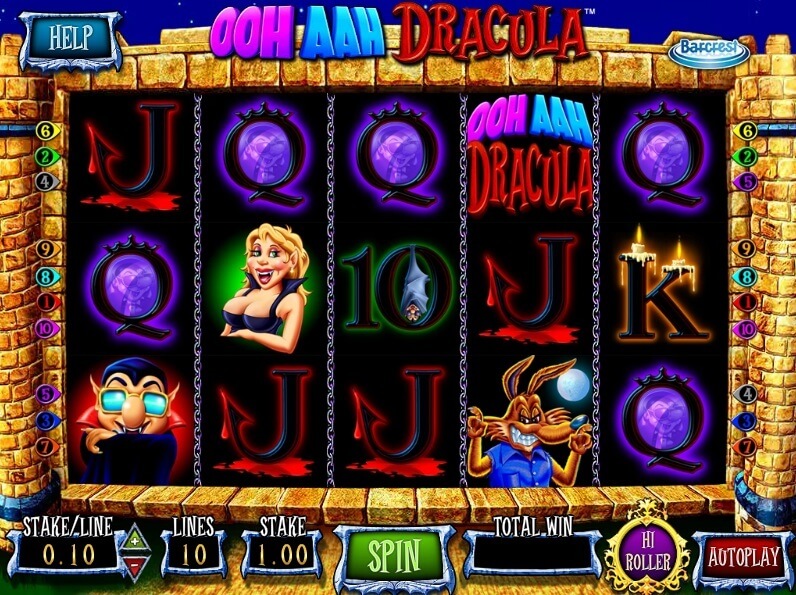 Barcrest's fun Ooh Aah Dracula Slot is a Count Dracula themed online slot which is more tongue in cheek than anything spooky. It's a cartoon themed slot which offers some comedy - yes it's a little bit cheesy but it's really fun to play!

Perhaps you've already seen the land-based slot machine version, as it's also a very popular game in many land casinos up and down the country and around the world.

Ooh Aah Dracula Slot offers some great in-game features which you'll encounter, including Wilds, a free spins feature and also a high roller feature too, to help net in those big wins! To read more about this game, then hop to our Ooh Aah Dracula Slot Review, or give it a try at Casumo Casino below. 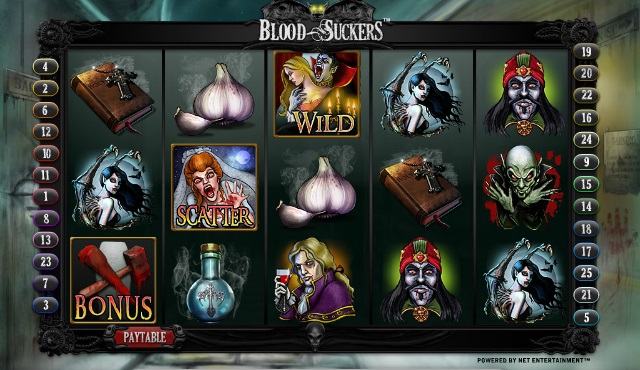 This fantastic slot feels as though it’s been around for centuries, and in actual fact, it was one of the original slots to be released by Netent. Delightfully classic, with a vampire damsel in distress storyline, Bloodsuckers Slot still remains popular to this day even though it was released in 2009.

It may not boast the high-grade 3D graphics or wacky in-game features that we've seen of late, but Blood Suckers does give you a thrilling time as it’s a high variance slot.

What's more, the Bloodsuckers slot has a high payout rate of 98%, which is one of the highest payback rates around.

Blood Suckers Slot is available to play on mobile devices and desktop and can be played at most Netent casinos. Play now at Casumo casino below! 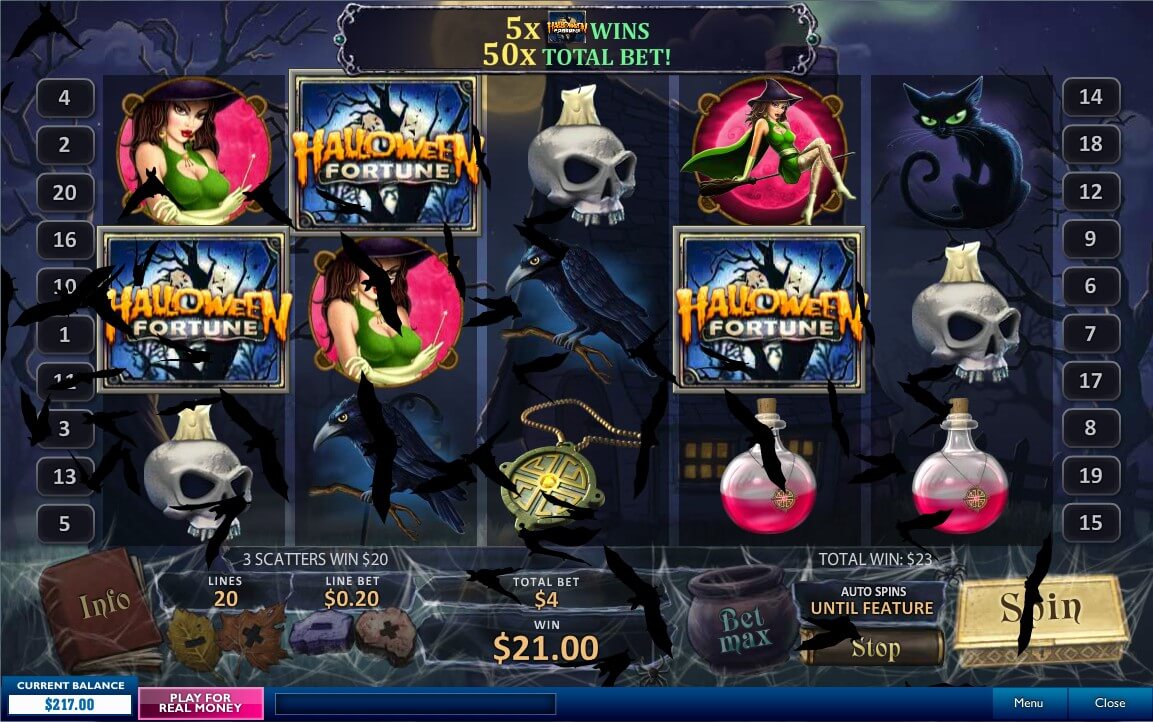 You’ll be spell-bound by all of the ways you can win when you play Halloween Fortune slot. It doesn’t need to be Halloween to enjoy this slot, but just as well as were in time for the big night!

Halloween Fortune Slot has a spooky theme and is designed with 5 reels and 20 pay lines. All the icons on the reels are in the Halloween spirit: Pumpkins, Lanterns, Black cats and Witches and potions and lotions.

There’s a number of decent bonuses on hand to spice up the Halloween adventure. There’s the jack-o-lantern wild symbol which substitutes every icon aside from the scatter and bonus game symbols.

Get a hot cauldron appear on the first and fifth reels, which will trigger the Witches Brew bonus! In this round, help the witches create a magical brew to win big: up to 20 free spins with a 10x multiplier is up for grabs!

If there was ever a time to laugh at Skeletons then it’s in this super genius, wacky, crazy slot by Thunderkick games! Thunderkick, a relatively new slots company based in Sweden, is now infamous with coming up with hilariously funny or just downright unique slots which go against anything you’ve seen before. And Esqueleto Explosivo Slot is a prime example of that.

Celebrating the 'Day of the Dead' festival, this slot offers some skulls on the reels and music by the Mariachi (Skeletal) band called 'The Boners'. A fab soundtrack, a little spooky and perfect for Halloween. Thunderkick games are known for offering higher than average payout rates too. You can play Esqueleto Explosivo Slot at Vera & John Casino below! 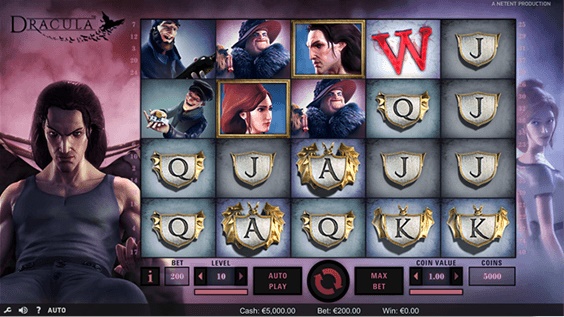 You’ll notice that when you load the slot, he’s sitting on the side of the screen, hissing when you win, but really he’s waiting for you to reunite him with his lost love Mina.

Dracula Slot is recommended for this Halloween and can be played on desktop or on mobile at any Netent casino which also offer branded Netent slots. 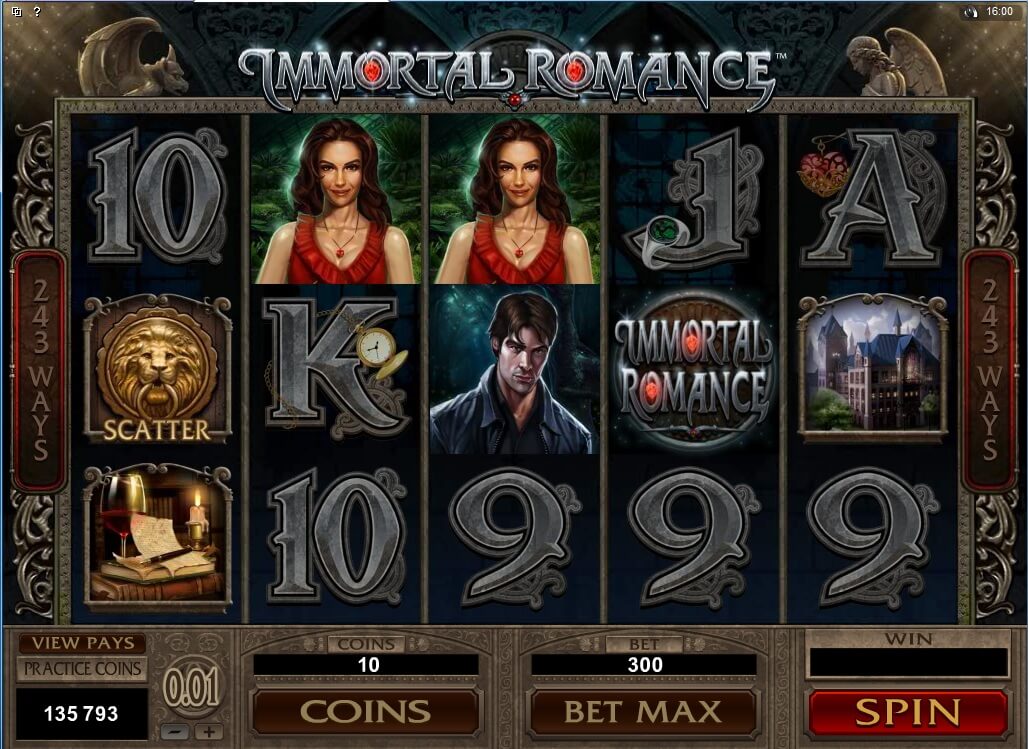 What more perfect than a vampire saga to play on Halloween? Get nostalgic over the Twilight films, because if you liked those, then you’ll really like Immortal Romance Slot by Microgaming.

Immortal Romance Slot tells the story of Amber, Troy, Michael and Sarah and depicts a dark tale of love, deception and some good old fashioned vampire drama. It's dark, thrilling and has a completely apt soundtrack to creep you out just a little when you play.

Immortal Romance Slot has many unique and captivating in-game features such as 'The Chamber of Spins' which is a tiered free spins mode that will award you an entry into one of the four features in the game and is based upon the number of times you have managed to trigger the feature.

Where Will You play this Halloween?

If you’re looking for a new casino this weekend, to play all of these recommended slots and so much more, then have a look at all of the new slot sites we've reviewed and added recently which we think you'll like. All casinos are trusted, offer the best bonuses and promotions, best games selection and are all licensed by the UK Gambling Commission.