Amaya Gaming have again collaborated with DC Comics to bring you an amazing Super Man themed slot which is full of drama, heroes and adventure!

Super Man:The Last Son of Krypton isn’t the first slot Amaya have released with the super man theme, but this edition is the most modern and thrilling due to all the extra features it has, which we’ll get to below in just a moment. This slot is based on the 1978 novel, which was written by Elliot S. Maggin back in 1978. Let’s see what the online casino slot version has to say for itself.

How to Play Super Man: The Last Son of Krypton 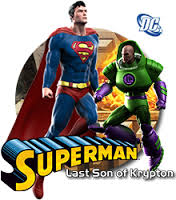 Superman: The Last Son of Krypton slot is set in a time where an Alien invaders are wreaking havoc on the town metropolis, and it's up to Super Man to do nothing better than what he does best, and that's saving the day. But, more over, it’s also up to you to help him. If you manage to get the right combinations on the reels to do so, then you’re be rewarded with the gold coins for your efforts in the drama as well. Let’s get started and set the slot up to how to you prefer.

Super Man: The Last son of Krypton is designed with 5 reels, 3 rows and a total of 25 pay lines. The graphics are quite modern and look good, as does the soundtrack compliment the theme. On the reels you’ll see icons such as Clark Kent, Lois Lane and the Daily Planet newspaper, and also the reels feature the standard playing card symbols: J,K, Q, A but you’ll notice that they are not your standard form. Look out for the newspaper front page which shows each letter as the headlines. You can bet per Line from 0.01 to 5, with a max bet of 125.

There are 2 main bonus features in Super Man: Last Son of Krypton Slot plus there's also Wild, Multipliers and a free spins round. The two main extra features are called Lex Luthor and Lois Lane.

Lex Luthor Feature: The bad boy Lex Luthor Frozen Wild feature is triggered when a Superman drops from the first reel and so does Lex Luthor from the fifth reel, simultaneously. Here, you need to select one of five pictures when an additional screen pops up, to find out how many extra free spins you can get. The minimum is 3 free spins, and the maximum is 10 free spins. There are also multipliers which can reward you up to x5 during this round. What’s more, is that up to 3 reels (not including the first feel) can also be frozen in each of the spins to become 'Wilds' for even more win opportunities.

Lois Lane Wild Hearts Feature: You can activate this feature when Superman and Lois Lane appear at the first and the fifth reels at the same time, much like the Lex Luthor feature above. At this point of the game, you can choose one of the five symbols on the screen which will be presented to you. This round is actually a bit better than the Lex Luthor round as here you can gain from 10 to 20 free spins which enhanced multipliers. What’s more, is that there’s extra wilds in shape of hearts that can appear on the reels excepts again, on the first, and these symbols can replace any missing symbols from a winning combination, so will help you ultimately win more coins.

We gave this mobile slot a little spin whilst playing on our iPad. It loaded relatively fast, and fitted our iPad just fine. The graphics are quite clear and sharp and rather futuristic looking. You can also see the back drop scene of which this slot is set, much like the desktop version of the game. You can easily spin the reels with the large button on the side which is perfect for smaller devices such as mobile phones and tablets. When you win, the icons kind of light up and go enhanced, to show you which line won and the amount you won will flash on the screen.

If you want to change the betting style and add or decrease you bet amount, then it's easy to do so by clicking on the small button on the left hand side to choose settings. Here you can increase or decrease your bet limits, click auto spin if you want to, and also choose if you want to hear the sound, or play in a quiet fashion. All in all, an easy to play slot that looks good and if you’re a fan of the comics, book, the Television series or TV franchise, we think you will enjoy this slot a lot. But, you needn’t be a fan as it’s very entertaining in it's own right. 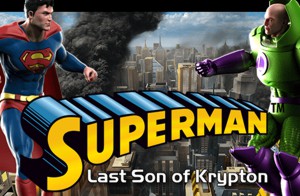 We enjoyed Super Man: The Last Son of Krypton as we found that the extra features which are called Lex Luther and Lois Lane, helped us win some extra times and kept the game play really fun. We’re not even huge fans of the theme generally, but you don’t need to be. The graphics are great and perfect for an on-line video slot. This slot is perfect for all types of casino fans as you can bet small or high and see regular wins.

This online slot is conveniently designed so it's perfect to play on all devices and has some sharp 3D graphics. You can opt to play for free before you play for real at any recommended casino below, just by clicking demo version where the slot will load so you can see for yourself. Then get strated for real with some great value casino bonuses below.