Netent are taking us to the fair with this online slot, which is jam packed full in genius features such as the Claw Feature and a total of 6 thrilling bonus games!

How To Play Theme Park: Tickets of Fortune Slot

You can experience all the fun of the fair with Netent’s Theme Park: Tickets of Fortune™ slot, which is the latest slot offering from NetEnt to be released on 22nd June 2016.

Theme Park: Tickets of Fortune™ is designed by Netent with 5-reels, 3-rows and a whopping total of 50 pay lines. The slot itself is designed in bright colours, with that magical retro fanfare type soundtrack.Icons on the reels are made up of balloons and dodgem cars and fun fair rides. In the back ground, you'll a backdrop with Rollercoasters and Helter Skelters; you know the typical fairground rides. At first glance,the look of the slot itself did remind us much of the design of Netent’s Tornado Farm Escape Slot.

To get started, find a Netent Casino which offers Theme Park: Tickets of Fortune Slot and set the slot to your preferred playing limits. The coins range from 0.25 to 250 with 10 betting levels. Once you’ve got that sorted, it’s time to buckle up and see what you can win at the fair!

It’s fair to say that Theme Park: Tickets of Fortune Slot offers a lot of exciting in game features, such as Stacked Wild Substitutions, a 'Claw Feature' and a total of 6 Theme Park Bonus Games, from which you can win prizes by spinning the Theme Park Bonus Wheel or playing the Theme Park Ticket Game. There’s isn’t a free spins feature in this slot, but what it lacks with those,it makes up by miles with all the added extras you’ll encounter when playing the game, as we explain below:

Stacked Wilds: The wild symbol is depicted in the form of rollercoaster carts, which can stack together to fill entire reels. These Stacked wilds can really help you land some big wins thanks to the magnificent 50 pay line structure that this slot offers.

Claw feature: It’s an interesting name alright and let us explain what the Claw feature really means. When a claw symbol appears on the reels during a normal spin (during the main base game) it will expand and then, here’s the fun part; it’ll reach off of the side of the screen to grab a prize, which is then turned into coins! So the claw is exactly like those claw machines you find at fun fair, only what I can say is that you’ll probably have far more luck in this video slot than any actual claw machines at Fun Fairs (it can’t just be me that never wins anything?) 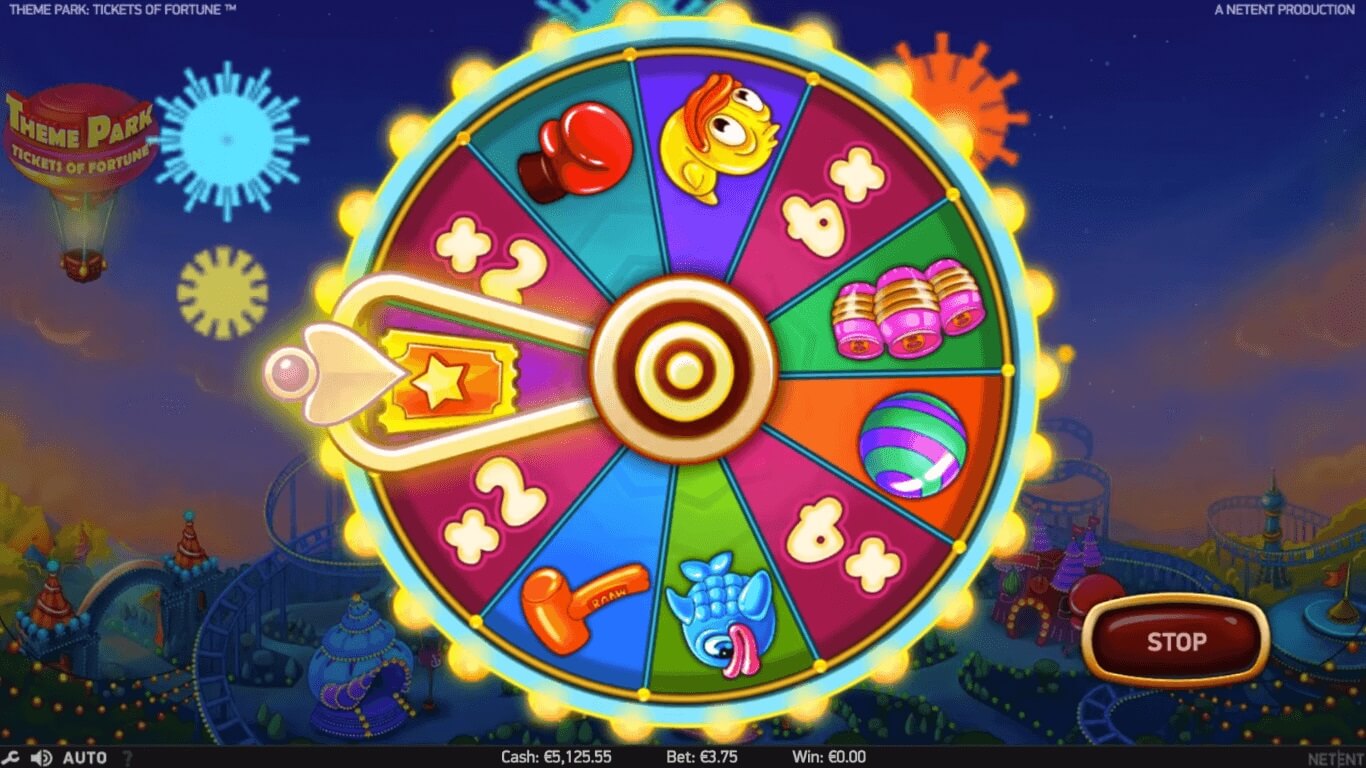 Golden ticket feature: When you land three golden ticket scatter symbols, you’ll trigger the ‘Wheel of Fortune’ bonus round. We’ve seen such wheels before and it’s not exactly a new feature, but it is exciting all the same, as you’ll have chance to spin the wheel and claim some tickets which can be used for a further one of 6 bonus features, which are as follows:

Duck Shoot feature: You’ll get 5 duck shots which will reveal cash prizes. After each shot, the multiplier will increase from 1 up to a x4.

Skee Ball feature: In this feature, you need to throw the ball and make that sure they land in various holes. This feature can pay out well if it pans out as you can win up to x20 your stake.

Sledge Hammer feature: This is the ultimate strength test! In this feature, you’ll need to hit the hammer and ring the bell at the top, suffice to say, the higher you hit it, the bigger the cash prizes are.

Punching Bag feature: Simply punch the bag as hard as you can in this feature and a bit like the sledge hammer feature we mentioned above, the harder you hit it, the more cash you’ll win.

Can Tower feature: In this feature, you get to throw balls and knock over as many cans as possible. If you succeed, you’ll be awarded with cash prizes.

Fishing feature: A notorious game at the fair, this is a simple yet fun feature, and is where you need to hook fish and you’ll reveal some nice cash prizes. 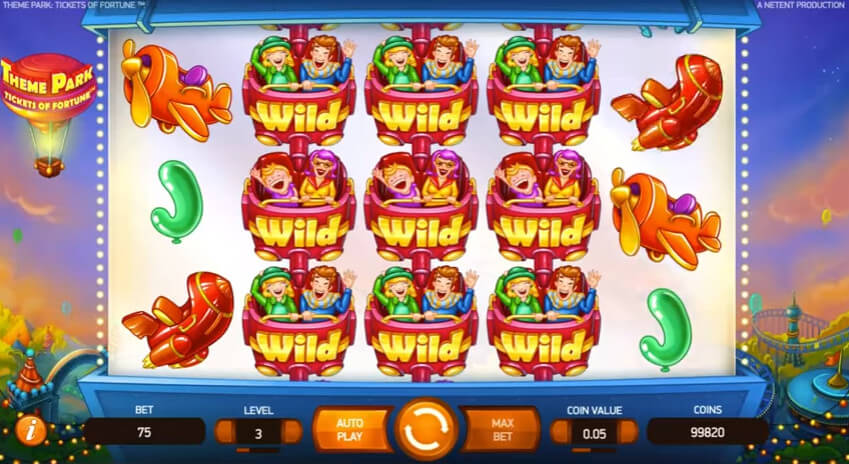 Theme Park: Tickets of Fortune Slot is available to play on all smart phones and tablets and forms part of the Netent Touch™ Mobile Slots, which are adapted slots which look and act perfect on smaller devices with touch screens.

Theme Park: Tickets of Fortune Mobile Slot looks amazing on mobile format and doesn’t lose any of the in game features we’ve mentioned above.

All in all, if you’re looking for a mobile slot which offers many fun in game features then Theme Park: Tickets of Fortune Mobile Slot comes highly recommended.

Netent have been a bit hit and miss lately with some of their new slots released, perhaps it’s been due to the hype surrounding them, that they just didn't live up to our expectations, especially with their 'Netent Rocks Tour'.

Admittedly Guns N Roses Slot is fab, but then came Aloha! Cluster Pays Slot and the Jimi Hendrix Slot which were in our opinions, a bit middle of the road.

But... Theme Park: Tickets of Fortune Slot is, we believe putting them back on the map of making awesome slots once again. The extra in game features are what makes this slot, from the bonus wheel where you’ll get tickets for one of the fun 6 extra bonus games, to the claw feature which awards you extra cash prizes too.

Theme Park: Tickets of Fortune Slot has a brilliant theme, we can’t imagine anyone not to like or love this theme, it's probably going to be a bit nostalgic for most.

Have a try yourself and play at any of our recommended top Netent Casino below, each of which offer the best casino bonsues and free spins offers for new customers.