Back in the 70s a game was released. This game, boasting cutting-edge technology, took the world by storm. Its name? Space Invaders. You can now play that game in the form of a slot machine, and boy is it wonderful.

How to Play Space Invaders Slot

The Space Invaders slot has 5 reels and 10 potential paylines. The minimum bet per spin is 10p. The maximum you will be allowed to part with is £100. This is no way in which you can change the paylines you are betting on, so it will always be 10. This keeps things simple.

The theme of the game is Space Invaders. It is not just a terrible use of the intellectual property either, it looks like Space Invaders. Playtech have put a lot of effort into replicating the whole Space Invaders experience. In fact, the slot machine is set in a classic arcade cabinet, and it comes with a whole host of ‘arcade buttons’ to press.

There is even a Turbo button, but we are not quite sure that that does. Basically, if you are a Space Invaders fan, then you are not going to be disappointed by the way the machine looks. It is a faithful recreation. Well, as much of a recreation that a slot machine version of an arcade game can be. It's a bit like Thunderkick's Arcader Slot but this is "the original"!

One complaint that we have heard about the Space Invaders slot is that it is complicated to understand. It isn’t. It is one of the easiest to play slot machines that we have used in years. You don’t have to do anything. The maximum amount of effort you will need to put in will be click that spin button with your mouse. It may not sound like fun, but we promise you, it is!

As mentioned previously, this is a game which Playtech have tried to make as simple as possible for their players. It requires no interaction other than hitting the spin button. All the features that can occur in the game are random and can be found during general gameplay.

UFO Feature: The first feature involves the UFO which is flying about the reels. In the original space invaders game, the UFOs were trying to escape from the cannon at the bottom of the screen. They are doing the same thing here. The UFO will move about when the reels spin. If, when the reels stop, the UFO stops directly under the cannon, you will get a free re-spin. This won’t be any old respin, though. With this respin, you will be awarded up to 9 wilds on the reels. The UFO will just spit them out on there. This can lead to some massive wins, and we must say, that is something that we like a lot.

Cannon Feature: The cannon plays an important role in another feature. As you will notice when you play the game, it enjoys moving about. If it stops under either the 2nd or 4th reel, it has a chance of firing. When it fires, it will blow away all the low paying symbols on the reels. These symbols will then be made into wild symbols. If the wild symbols form part of a winning combination, then a 2x multiplier will be applied. 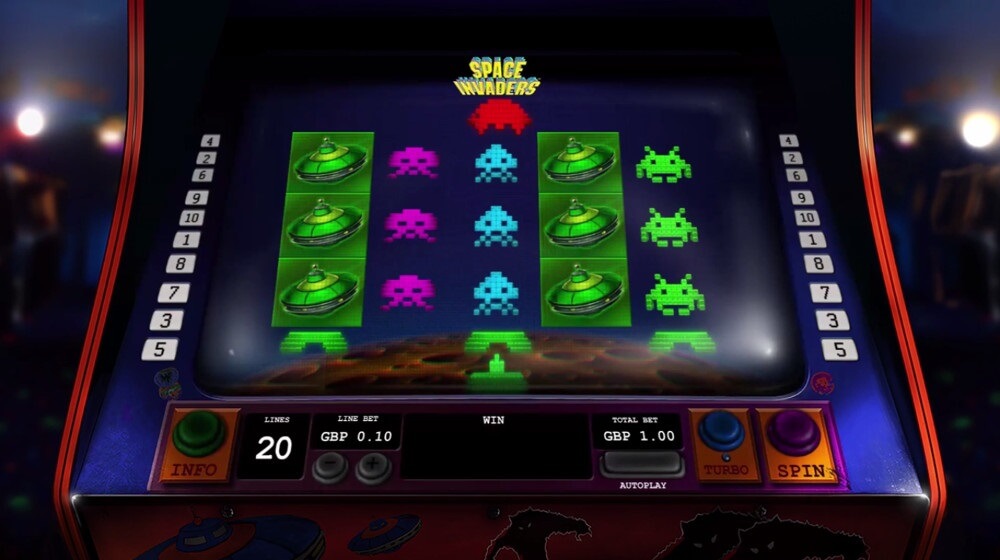 We had a fear that the Space Invaders mobile slot would be abysmal. This is because the look of the arcade cabinet takes up a good proportion of the screen. When we booted the game up on our phone, we were prepared for disappointment. We did not get it. The Space Invaders mobile slot machine looks wonderful. This is not just because we were pleasantly surprised. We have shown this game to tons of people, and all of them say that the game looks good. We will agree with them.

If we had to come up with a Space Invaders slot machine idea, we don’t think that we could have come anywhere close to the awesomeness that this one offers. Playtech have done the Space Invaders brand justice. They have created a game that is not only huge amounts of fun to play, but a game that really does ‘look the part’. As our old teacher used to say.... A+! (although, that was not necessarily to us)

Struggling to find a website where you can play Space Invaders? Have no fear! We have put together a list of some of the best Playtech websites around. Have a look at our recommended casinos which offers Space Invavers Slot below and sign up for one of them. You know you want to relive your childhood (or your parent’s childhood!)

Other Top Casinos Where You Can Also Play This Game...