Enter the silent age of films with the Silent Movie Slot from IGT. With a pretty fantastic four free spin feature, you are going to have a ton of fun diving into this game.

How to Play Silent Movie Slot 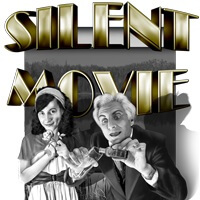 The Silent Movie Slot machine boasts 5 reels and 30 paylines. The minimum bet is 30p with the maximum bet at £90. This makes it one of the slot machines out there with a lower ‘upper limit’. This means that you have an opportunity to ‘win big’ without spending tons and tons of cash on attempting to do so!

The whole theme of this game is on the ‘silent movie’ era. The vast majority of the game is designed with ‘black and white’ images. Now, when we first saw it, we could never have imagined that it would look so great. After all, many of the top ‘slot machines’ out there tend to favour the colour images in order to make the theme work. The Silent Movie slot did not have this luxury, but it still managed to end up working remarkably well, despite the constraints.

Your images on the slot machine are director’s chairs, cinema reels, cinema tickets, and some slate boards. There are also a number of characters which look like they have been taken directly out of silent movies of the era. All combine to create a wonderfully designed game which is a ton of fun to play.

The bulk of the game, as with most other IGT slots out there, is just the ‘base game’. You hit that spin button, and hopefully those wins will start to roll in pretty quickly. Surprisingly, the game actually has a fairly decent payout rate. You are going to stumble across features from time to time, but they are not going to come in thick and fast like other slot machines out there.

To us, that makes the game seem a touch more special in the grand scheme of things, and this is something which we really, really do like! There are far too many companies out there who seem to think that bonus rounds need to come after every other spin. However, we do find that this is something which can get a bit boring from time to time!

There are a number of different features built into the Silent Movie Slot machine. Whilst this is not where the bulk of your wins are going to come from when you are playing the Silent Movie slot, they are always nice when they pop up, particularly since there is a chance that you will be able to score yourself a few free spins! Whenever you trigger a feature, you will get 3 times your initial stake back.

2 Cinema ticket symbols and 1 Dr. Jekyll and Mr. Hyde symbol: You will need to get the cinema tickets in on reels 2 and 3, and the Hyde on reel four. You will start between 3 and 6 spins. All wins will be multiplied by 3. You can earn more free spins.

Trip to the moon: the cinema tickets on the same reels as Hyde, plus a ‘Moon’ on reel four. You get between 10 and 15 free spins. Wilds are added to the reels.

Muddy Romance: this feature is triggered when you get the cinema tickets plus the muddy romance symbol. You get somewhere between 6 and 12 free spins. You get a few extra scatters on the board.

Keystone Kops Bonus: 10 free spins with a multiplier for the first five spins between 2x and 5x. On the final five spins, this will be doubled.

As with most other IGT games out there, you are also able to dive into the Silent Movie mobile slot. This mobile slot, available on all popular mobile devices, works in very much the same way as the standard machine. This means the same function, the same bonus features, and it is looks brilliant too!

The game is incredibly well-optimised, which means you should be able to experience the Silent Movie mobile slot with very little in the way of slowdown. Once again, this is something that we really, really love to see in slot machines!

If you are after a nifty little slot machine which is not too heavy on the features, then you are going to want to give the Silent Movie Slot machine a spin. It may not have the bright colours that you are used to with other slot machines out there but, as we said, this is something which really is not needed.

With that said it does also remind us a little bit of Netent's The Invisible Man Slot as well, so if you enjoyed that little myserious slot, then you're probably going to enjoy Silent Movie Slot too.

This is a game which is strong on the gameplay, and the wins, which means that you are going to have a rip-roaring time anyway!

You can check out the Silent Movie slot machine on most websites which boast IGT games. They shouldn’t be too difficult to find, and you will see a number of them listed below.