This military-themed game from Microgaming is sure to keep you entertained for hours upon hours. Major Million is well-known for its ability to pay out big, and often! 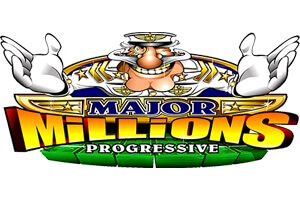 This is a 5 reel, fifteen pay line game. This means that it is really ‘back to basics’ when it comes to slot machines. However, the simplicity of the Major Millions 5 Reel Progressive Jackpot Slot is something that we genuinely love. You don’t have to pay attention to dozens and dozens of different paylines.

You just have to focus on three of them. Remember, this is a progressive jackpot slot machine too, which means that the chance of winning big is there. We will cover a little bit more about the progressive nature of the game in a short while, however! The minimum bet on this game is 0.20 coins with the maximum bet being 300 coins. In order to be in line for the progressive jackpot, you are going to need to trump up a minimum of 3 coins.

This game is unique insofar as the fact that you have two modes. You have 'Regular Mode' and 'Expert Mode'. However, for most people, the difference between the two is negligible. The only real ‘benefit’ to playing in expert mode is the fact that the game will autoplay for you. You just need to set the coin size that you wish to bet, walk away and, hopefully, come back a winner.

Obviously, the autoplay nature of the game means that it is only really going to be suitable for those who don’t mind losing a bit of cash without much control over what is going on. It can be quite a nerve-racking experience for some people! Obviously, the nature of the expert mode does show you that there is not a whole lot to understand with regards to the game.

It is a game that is going to involve very little interaction on your part, even if you play in regular mode. However, sometimes this is the type of game that you can really sit back and learn to love, mainly because nobody wants to deal with the complicated nature of many other slot machines out there.

As with other Microgaming games, you will be pleased to know that there is also a mobile version of the Major Millions 5 Reel Progressive Slot! One of the wonderful things is that this game is dreadfully simple.

This means that you can play it, even on the oldest of mobile devices. The fact that you have the potential to win big and do not have to concentrate all that much on the game makes it brilliant for playing whilst ‘on the way to work’. In fact, we know plenty of people out there who actually do this!

For a game that doesn’t have a whole lot going for it in terms of special features, or even in terms of pay lines, we did actually have a brilliant time playing the Major Millions 5 Reel Progressive Jackpot slot machine.

We feel as though it is simple enough for people to pick up and play like their very first slot machine, but there is still enough going on to ensure that even the most avid of slot machine players are going to have a brilliant time diving into the game.

With a number of Microgaming slot machine websites out there, you shouldn’t have too much difficulty when it comes to finding somewhere to play this too! Why not give it a spin at our recommended Microgaming casinos below? It really is going to be one of the better progressive slot machines that you have played.

Where To Play Major Millions Slot