100% up to £475 Bonus
100 Bonus Spins on Mega Moolah
Visit Captain Cooks Casino
Welcome offer is for new customers only. The minimum first deposit required is £5, for all subsequent deposits the minimum deposit is £10. The 100 chances are credited as a £25 bonus and players can wager 100 times at £0.25 on the Mega Moolah slot machines. A two hundred times wagering requirement applies on all bonuses and certain games contribute a different percentage to the wagering requirement. 18+ T&C's | BeGambleAware®

Mega Moolah Slot is one of the original progressive jackpots which pays out some serious 'mega moolah' when won! Mega Moolah has a guaranteed £1 Million Jackpot, but often is much larger than that! Launched by Microgaming in 2009, it offers a total of 4 jackpots, and a timeless fun Safari theme which has made this peoples favourite progressive slot to play over the years.

Mega Moolah Jackpot Slot is the most well-known progressive jackpot slot online, probably because it's one of the original progressive slots online. Sometimes, people ask themselves "Mega Moolah Slot is legit or real?" because of the huge jackpot it pays out. The short and true answer is, yes, of course, it's real!

Mega Moolah is a progressive slot which means the jackpot grows larger when people wager on it. Imagine every casino player playing it every Microgaming casino is adding continuously to the jackpot; it's no wonder the jackpots grow so large. You can also see the latest Mega Moolah Jackpot winners below.

How to Play Mega Moolah Slot

Mega Moolah Slot by Microgaming is based on a wild African safari theme, which reminds us of Disney's 'The Lion King'. Think of Zebras, Giraffes and Antelopes and a hot hazy sunset over the African plains, and you'll get the right idea of Mega Moolah's theme.

Mega Moolah Slot is designed with a total of 5 reels, 3 rows and 25 pay lines. The minimum wager starts as small as £0.01 and goes up to £6.25, which is great news for more casual players who aren't looking to bet larger amount per spins but still have the jackpot in their sights.

For all high-rollers out there, you can take that worried look from your face as you might be happy to learn that the higher you bet during Mega Moolah Slot, the greater your chances of winning the progressive jackpots actually are, but it is all random of course. To get started playing Mega Moolah Jackpot Slot, you'll need to play at Microgaming Casino Sites, so pick your favourite online casino which offers Microgaming slots, such as our recommended Microgaming casinos below, and get started.

Now let's get down to the business of playing the slot and what you can expect to encounter. Mega Moolah Jackpot Slot is designed to keep things simple and it's really all about the Multi million jackpots, both the Mega progressive jackpots and also the lower value local jackpots.

Aside from the jackpot, there are a few extra features that you'll encounter when playing, such as Wilds and a really helpful free spins game.

Mega Moolah's Wild Symbol: Mega Moolah's Wild symbol is depicted by natures most powerful, top of the food chain animal - the Lion! This friendly Lion icon will substitute all symbols, except for the scatter monkey, to help create extra winning pay-lines so you can win more coins.

Free Spins Bonus Game: You'll get to the free spins bonus game when you get three or more of the wise fortune telling monkeys (they're purple and red coloured - see above) If you trigger this feature, you'll activate a total of 15 free spins, where these wins will be tripled.

This is a great feature as it can top up your casino balance quite nicely, helping you play longer in the event that you haven't won a jackpot yet or it'll land you some nice sizable wins for you to cash out.

How To Win The Mega Moolah Jackpot?

In this section, we'll highlight what you need to look out for to win the Mega Moolah Jackpot. Keep in mind that when you play online casino games, it's all very random and is determined by the games own RNG (Random Number Generator). If we knew the answer to this question, then we'd all be millionaires!

How do you win the Mega Moolah Jackpot? For a start, you need to be in it to win it and get the bonus wheel to pop up. But winning the jackpot is totally random. It is said, however, that the higher you bet, the higher your chances of getting to the bonus wheel to pop up, which is the best clue we can give you about ways to win the Mega Moolah Jackpot.

The Mega Moolah Bonus Wheel: This is what you're going to be wanting to see as it'll take you one step closer to that multi-million jackpot. As we said earlier, it'll pop up randomly and will look like a spinning 'Wheel of Fortune' style prize wheel. If you're faced with it, you need to click 'stop' and wait for it to slow down and stop.

Hopefully, it'll land on the Jackpot prizes, or one of the other local jackpots (Major, Minor or Mini) which still pay out great wins, or it'll return you back to the main game. 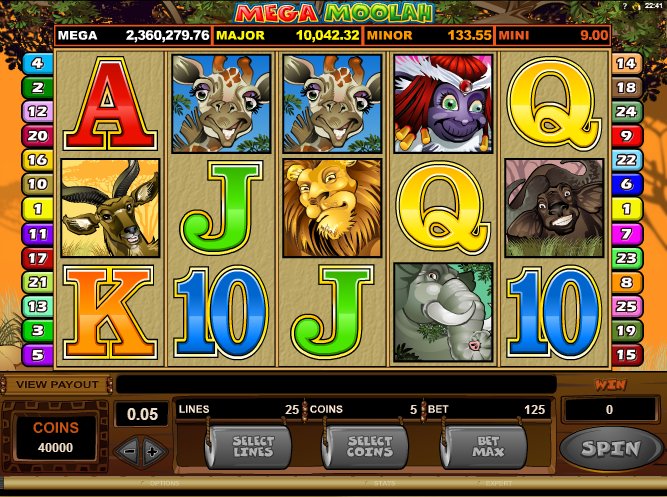 Mega Moolah Mobile Slot is available to play on almost all smartphones and tablets, so you can play for the Mega Moolah Jackpot, literally any time and anywhere. When you play the mobile edition of Mega Moolah, you can still expect the same experience. Mega Moolah Mobile slot offers the same top quality graphics, a fitting soundtrack and bonus features, including the Wilds, free spins games and the bonus wheel, which can land you one of the 4 progressive jackpots!

Since Mega Moolah has been around since 2009, it has, of course, made its fair share of overnight millionaires! See below for some record-breaking highlights from the past half-decade (some in € and $). It's all true; look it up on Google!

£3.2 Million, October 2015: The most recent and the record-breaking Mega Moolah jackpot of £13.2 million was won on the 6th of October 2015 by British soldier Jonathan Heywood, hailing from Cheshire, UK. You can read more about that story here.

£5.5 Million, April 2008: Another large jackpot win went to a Finnish Player who lives in Turku, Finland. This amount was slightly smaller than some jackpots which have been won, but it's still an amazing $5.5 Million!

£6.3 Million, 2007: One of the more original wins back in the day came in the jackpot amount of £6.3 Million to a very lucky player from Greece. Known only as Georgios, he wagered an equivalent to about €5 and came away with an absolute fortune!

Mega Moolah Slot is an all-time favourite progressive jackpot slot of ours. The reasons are simple. Mega Moolah Slot is designed with everyone in mind and all types of casino player. It's accessible for everyone. Having a maximum bet at £6.25 means that all types of players, from casual to high rolling can enjoy it. Mega Moolah Jackpot Game gets top marks from AllGamblingSites as it delivers everything you want from a progressive jackpot slot; good graphics, a few extra features and a multi-million jackpot!

Where To Play The Real Mega Moolah Jackpot Slot