The Jade Magician is one of the most popular slot machines in Play N’ Go’s arsenal. This should come as no surprise, really. The game not only looks great, but it is immensely fun to play too. We are sure that you will love it!

How to play Jade Magician Slot 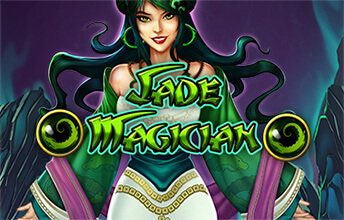 This is one of the newer slot machines on the market, released in January 2017. This means that you can expect nice and fancy graphics when you dive into the game for the first time!

One of the things that we love about this game is that it is returning to simplicity.

For far too long, slot machines seem to be going back down the route of being complicated things where you can’t make head or tail of what is going on.

Thankfully, the Jade Magician slot is not like that. Not only does the game look beautiful, but everything looks crystal clear on the screen. You are not going to be confused about the game at all!

As this is a Play N’ Go game, you can expect something which is simple and fun to play. Do not expect the game to blow your mind in terms of features.

If you want something that is going to be the perfect game to kick back and relax with, then this is the right slot for you. We have recommended this to both newcomers and experienced players alike, and they all say that Jade Magician is an awesome game to play. We are inclined to agree.

There are a few features to sink your teeth into here, but nothing that is going to blow your mind in terms of complexity. We mentioned this before, however.

Jade Magician Wilds: The first is your wild. Now, as with most other slots, this wild can be used as a substitute for every other symbol in the game. However, in Jade Magician, it only appears on the third reel. It does come with a nice little multiplier, though. If this forms part of a winning combination, your win will be multiplied by 2!

Pay on Adjacent Reels: Another feature, and one that you may be encountering a lot is known as ‘Pay on Adjacent Reels’. If you have played Just Jewels Deluxe, you will know what to expect here. Three or more symbols will pay out as long as they are adjacent to each other i.e. within 15 paylines.

Scatters: Second Chance occurs if you get two scatters on the screen. You will be asked to select one of four symbols that appear on the screen. The feature will award you:

If you get three scatter symbols total (or trigger this feature from the second chance game) then you will get 5 free spins. This may not seem like a lot of spins, but each time you get another scatter, you get either 1 or 2 spins added to your pool. It is common to end up with 20 or so free spins. The most you will be able to trigger is 50. It is also worth noting that the scatter during this game mode is wild!

We are going to be honest here. This is a slot machine which seems to work so much better as a mobile slot than when it is played on a computer. This is, in no doubt, down to the fact that the game has an air of simplicity about it.

If you want a fun game that looks gorgeous, but does not require that much in the way of brain power to enjoy, then stick this one right at the top of your list! It is going to be a hoot. We promise you of that. The game may be new, but we have been playing it almost non-stop.

If you are itching to play Jade Magician Slot but are not a massive fan of tracking down the game, then you will be pleased to know that the team here have put together a list of some of the best online casinos around.

This way you can spend more time playing the game, and less time tracking down a place to play! Have a look below.

Where To Play Jade Magician Slot