Age of The Gods Slot: King of Olympus Slot Review

Age of the Gods: King of Olympus Slot machine from PlayTech will send you back to the era of the Ancient Greeks. Here, you will be racking up the wins on this progressive slot like there is no tomorrow.

How To Play Age of the Gods: King of Olympus Slot

The Age of the Gods: King of Olympus slot machine is a progressive slot machine. It boasts 5 reels across 20 different paylines. The minimum bet on the machine is 20p per spin, whilst the maximum bet is £500 per spin.

As you probably expect from a game based around Greek Mythology, all of the major Gods make an appearance here. You get Poseidon, you have Zeus, and then you have Hercules and Athena thrown in for good measure. The Gods, of course, each have their own payout.

Athena is one of the most special in the game. If you have five of her appear on a payline, you will be able to enjoy a win that is 1,000 times your initial line stake.

This means you may be putting a substantial amount of cash into your pocket after just a single spin! Obviously, it is rare that you will hit it, but if you do, the sense of satisfaction will be incomparable

The game has a very epic feel to it. There is just something very regal about the backgrounds and the images used on the slot machine. Throw in the music (and of course the ability to win big!) and you have a game which is a true pleasure to play, despite its simplicity in comparison to a few other slot machines out there.

There are a few different features thrown into this game. Many of which give you a chance of winning that progressive jackpot. Of course, the odds of you walking away as a massive winner will be relatively slim, but at least there is a chance! I think that this is one of the main reasons as to why many people veer towards Age of the Gods: King of Olympus Slot, the chance that you may just walk away with a life changing amount of cash.

Laurel Wreath Wild Symbol: If you get 5 of these on a payline, then you will be able to enjoy 10,000x your initial stake. As with most other wild symbols out there, this will also be able to substitute for any other symbol on the paylines. This means that even if you just get one of them, it may put you on the path towards a serious amount of cash.

Pantheon of Power on Reels Feature: There are five Gods in this game, if you get them on consecutive reels on a payline, then you will be able to get 200x your line bet or 10x your initial stake.

Age of the Gods Bonus Feature: If you get three or more Age of the Gods symbols on your reels during the base game, you will see that 20 coins appear on the wall. If you are able to match three of the same God, you will get your free spins activated. The free spins feature will be dependent on the type of God that you match. This means:

Once you are done with the free spins, you go back to your wall of 20 coins. You can keep uncovering them until you find the Hades character. You can actually trigger the free spins feature a couple of times before that point. 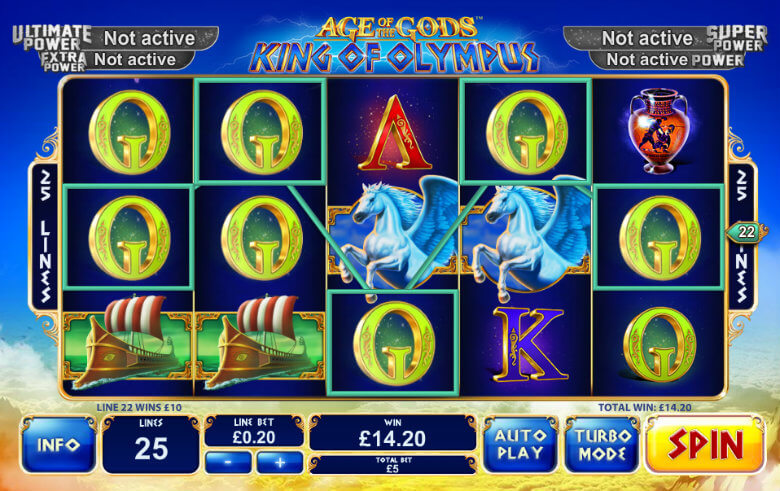 Age Of The Gods: King of Olympus Slot Mobile Game

This game is also available as a mobile slot. It plays just as well as the ‘desktop’ version. The simplicity of the game means that it is actually ideal to play ‘on the go’ on both smart phones or tablets.

This is a fantastic game. We absolutely loved the fact that the free spins feature was so in-depth. Each and every spin has the ability to completely change the way in which the game is going.

Throw in the progressive jackpot for good measure, and you will have a game that you will want to play over and over again.To play Age Of The Gods: King of Olympus Slot, check out our top rated online casinos which offer Playtech Slots and the bets casino bonuses below.

Where To Play Age of The Gods Slot