A great new modern Friendly Giant themed slot by Playtech. Which also happens to boast a huge Progressive Jackpot too

It’s true that Netent seems to get all the press at the moment when it comes to Progressive Jackpots, but let’s not forget about some cracking alternative jackpots that equally boast life changing millionaire making jackpots. Playtech already offer a handful of great and fun progressive slots to play the most well-known ones are probably our favourite Beach life and Funky Fruits but now there’s an additional one we are now keen on playing: Jackpot Giant!

Playtech's Progressive Slot Jackpot Giant is very cartoony and seems to go against other Playtech slots in the way of design and theme. It’s really nice to see that Playtech are modernising their slots more and coming up with different and diverse themes.

How to Play Jackpot Giant

Jackpot Giant Slot is set with an island backdrop, lush fields and volcanoes in the midst. It won’t be long until you meet one of the islanders himself, a jolly giant, from where the slot name derives, and who is undoubtedly a little crazy and adventure prone.

Since it was launched in 2014, Jackpot Giant has fast become one of Playtech's popular slots which is only a good thing as the more people who want to play it, the more the Progressive Jackpot grows, so it’s a win-win situation.

Let’s get started on the adventure: Jackpot Giant is designed with 5 reels 3 rows and 50 (fixed) pay-lines. The reels are designed in a transparent way, so you can see the background whilst you are playing. All the symbols on the reels match the theme so expect to see volcano lava icons, icons make of stone and carved rocks, that kind of thing. The icons also have their own animations when they make a winning combination, which is definitely a great addition. As we mention, the design of this slot is part of the draw factor aside from the jackpot. If you’re like us and love to be en-captured in different world and time within the graphics in an online slot, then Jackpot Giant will not disappoint you.

Get started and set the reels up to your liking: The Coin values range from €0.01 up to €0.08. There are 50 lines to bet on, and interestingly, you have to play all of them every time you spin the reels plus you can only bet one coin on each line (fixed pay lines). This means that you can bet in the range of €0.50 up to €4 per spin. This is perfect for those players who are less high rolling or who have smaller casino bankrolls, so playing Jackpot Giant for longer periods of time is totally possible as it won’t eat at your cash too much.

Aside for the obvious which is the Progressive Jackpot, there is really only one main extra feature in Jackpot Giant Slot.

Jackpot Giant Progressive Jackpot: To have a chance at hunting the Progressive Jackpot in Jackpot Giant slot, you need to be playing at the maximum bet level per line. The Jackpot is won if you manage to land five of the gold ‘Wild’ symbols on pay line number one (The pay line which goes horizontally through the middle row). You can see the jackpot total you can expect to get if you win, as it is shown above the reels in the base game (main game)

The Giant Bonus Game: The Giant Bonus game can be triggered when you land the volcano bonus symbols on both reels one and five during the same spin. If you get this, you’ll be taken to a separate screen displaying the friendly giant himself, who is standing behind six smoking volcanoes. Here, is your task is to pick three volcanoes at your choosing, for a cash reward. When you pick each, the giant will toss a coin into the volcano and your cash prize will be revealed. It’s also possible to reveal another chance to pick another volcano resulting in more wins!

You can indeed enjoy this cheeky and modern slot by Playtech on your mobile phone or tablet, the choice is yours. It looks great on either, and we gave it a spin on our iPad; it loaded fast and was great fun to play. You can enjoy all the same features in the mobile slot form, as you would on the desktop version, including the over a million progressive jackpot you can grab! 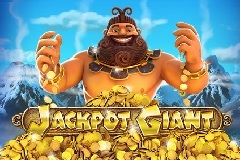 There seems to be a bit of a divide between players we’ve spoken to about this slot. On one hand, Jackpot Giant offers a huge progressive jackpot which is a huge win/pull factor for us. It’s also a Playtech slot which we love playing now and then as it evens out our casino time as we do tend to play a lot of Netent or Microgaming slots.

Some people feel there are a lack of extra features, specifically a Freespins round but we admit that we were kept entertained by the bonus game where you can pick extra cash prizes from picking a smoldering volcano. Jackpot Giant slot is great and rather low variance, so it doesn’t eat too much of your casino funds quickly due to the betting levels set up. All in all – Jackpot Giant is worth a spin for the jackpot alone! BGO Vegas Casino and also Grosvenor Online Casino offer all the Playtech slots and the best casino bonuses, or just pick one of our recommended casinos below and get the best casino bonuses whilst you’re playing!Recommended Casinos to Play Jackpot Giant Slot