A shadowy rift has appeared in a dark and gloomy back alley down town, and is feeding on all the worlds’ magical artefacts. Can you collect them all before they’re sucked through and lost forever in The Rift?

The Rift Slot by Thunderkick is an action packed online slot machine filled with HD visual effects, dark symbolism, immersive music and some powerful Sticky Wilds symbols to help you save the artefacts and land some big wins for your own pocket.

How To Play The Rift Slot

Thunderkick, a smaller more independent casino games company, are well known for their quirky, one of kind online slots and now after a small break, are back with another new and interesting video slot. We’re not sure why they took so long after the release of the previous Arcader Slot, but we do believe it probably had something to do with having to adapt all of their quirky slots to be mobile friendly.

In any case, Thunderkick are back and have released their first online slot machine of 2016 and it’s really good! The new slot is called The Rift and is completely dark, edgy anf highly charged. We’re told by Thunderkick that it draws most of its inspiration from horror fiction, in which stories are told of great entities beyond man’s comprehension, threatening to destroy our world in madness and obscurity.

The Rift Slot is dark but offers splendid HD graphics which are quite captivating. The Rift Slot is designed with 5 rows, 3 reels and a total of 17 fixed pay lines. It's set within an unknown city, someplace dark is where you’ll find and get acquainted with The Rift; a glowing purple haze in the floor which has appeared and will suck through the worlds treasured artefacts that you’ll never see again.

To play The Rift Slot, you’ll need to play at an online casino which offers the possibility to play Thunderkick slots. Have a look at our top casino sites recommendations below for some inspiration.

Get started and load the slot and you’ll be instantly see how highly charged this slot is, which is helped by some progressive dance music in the background.

Adjust the reels so you’re playing within your preferred betting limits. You can choose from 0.10 to 100, with a total of 15 bet levels to choose from. 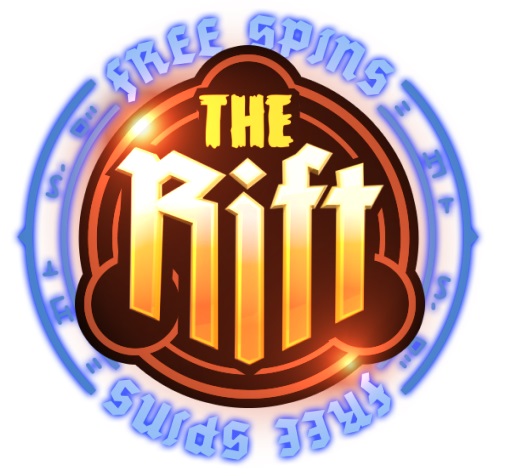 There are a lot of in game features which you'll encounter when you play The Rift Slot, including a Bonus game with Free Spins, Rift Spins, Sticky Wilds and re-triggerable additional Free Spins.

The Rift Bonus Game: The Rift seal is activated and can be advanced a total of one step for every scatter which you collect. For every 3 steps advanced until the seal is filled, will give you 1 extra randomly placed Sticky Wild and also 2 extra Free spins, enabling decent win capabilities.

Sticky Wilds: The Sticky Wilds are Wild symbols which will lock on to their position and stay ‘sticky’ until they become part of an active pay line, or when either the bonus game or Rift spin ends. Sticky Wilds is quite lucrative to land as they will help you win more by staying in place until they trigger a win line.

Aim of the The Rift Slot: You’ll soon begin to realise that when you play the bonus game, you will want to get as many Sticky Wilds as possible to fill the screen with before getting a win, for bigger wins. While in most games you play, you’ll always hope for a win, in The Rift Slot you might want to hope for a non-win and save the Sticky’s for later to get bigger wins!

The highest paying symbol, which is the book icon, will pay out 30 times your bet when you land 5 of them on a single pay line. Thunderkick Slots are known to be competitive when it comes to their theoretical return to player %. rate The RPT % for the Rift Slot is at a competitive 96.3%. 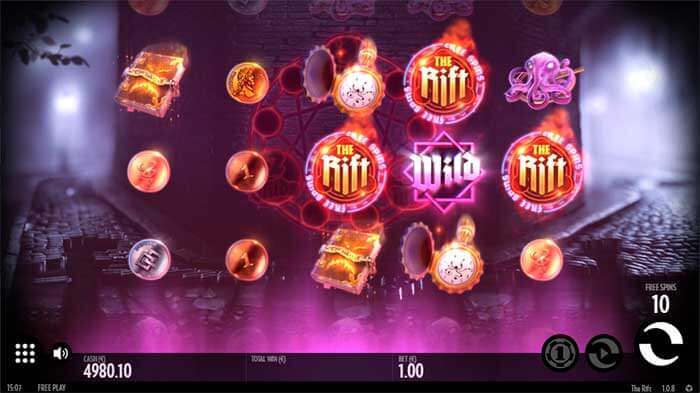 The Rift Slot can also be enjoyed on all smart phones and tablets and looks spectacular on both. For mobile casino players, The Rift Mobile slot is one to definitely try out because not only does it look amazing, but there are plenty of in game features which will keep you captivated too.

Play The Rift Mobile Slot with the freedom of playing anywhere and at any time. What’s more, we believe that playing Thunderkick slots definitely adds some variety to online slot games, when you compare to other leading slots from popular providers such as Microgaming and Netent.

You can play The Rift Mobile Slot instantly at our recommended online casinos below.

Thunderkick are back with another online slot, and again we see a quirky slot with amazing graphics and a fun theme.
Our highlights probably are the tempo in which you feel when playing, the high quality graphics and the helpful sticky wilds which make things thrilling knowing a big win can happen at any time.

Try out The Rift Slot yourself at our recommended Thunderkick casinos below and try something alternative from a game developer which may not have the most slots available, nor have been around the longest, but they are the ones which offer completely unique games which sometimes make a much needed alternative choice to the rest.

Try out other Thunderkick Slots such as Esqueleto Explosivo Slot and Magicious Slot.