Plunge to the deepest, darkest depths of the ocean. Maybe you will return with lots of treasure? Try out the Nemo’s Voyage slot machine from WMS today. You are in for a treat.

How to Play Nemo’s Voyage Slot 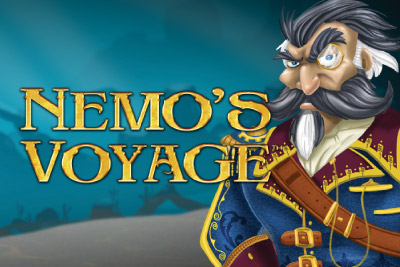 Nemo’s Voyage Slot has 5 reels and 40 paylines. This WMS-designed machine has a minimum bet of 40p per spin and a maximum bet of £200 per spin. This game is particularly notable as it is the first game developed on the Phantom EFX engine, although we are going to discuss that in a short while. If you can’t wait, then hop to the mobile section for a bit more information!

Nemo’s Voyage slot machine has a nautical theme to it. It is all about diving deep under water, encountering crazy creatures, and perhaps discovering a lost civilisation or two. We must say, this is one of the most beautifully designed slot machines that we have seen in a while. It has a bit of a 'samey' theme as Netent's Creature from the Black Lagoon Slot, so if you love that slot, you'll love Nemo's Voyage Slot.

The images are exquisite. The bonus round, which we will discuss in a short while, really plays into the whole theme of the game too. This is rare nowadays with many slot machine developers instead opting to put together a slot machine which is just a reskinning of one of their older machines. That is not fun in the slightest!

While Nemo’s Voyage Slot is a touch more complicated than some of the other slot machines out there, do not let that turn you off. The features that it boasts are the perfect introduction for newcomers to the world of slot machines.

They are not too complicated, but have just enough spark to keep you interested for a good while. There is not a whole lot that you are going to need to do once you enter the game. You just need to set the amount that you wish to bet per line, then the number of lines you want to play. After that, it is smooth sailing, albeit on a boat which has managed to sink and no longer sails, but that is just the underwater theme for you!

This game is all about the wilds. As you play the game, the pressure meter that you see on the screen will change. Each spin will increase the pressure on the reel. If you get a ‘Increase Pressure’ symbol on the fifth reel, it will move it quite a bit. If you get a ‘Decrease pressure’ then you will be undoing some of your hard work.

Don’t worry though, as this game rewards you with every spin, it should not be hard to keep up! There are various ‘coloured’ sections on the gauge. As you hit a coloured section, a new wild feature will occur. This is the order they appear in:

Multiplier Wilds: All Wilds will now be multipliers. They can be 2x or 3x. Any wilds which appear on the same win line will be added together.

Pressurised Wilds: the ‘pressure symbols’ on the reels will now become wild.

Stacked Wilds: all of the wilds that appear on the reels will now be stacked.

Wild Reels: the whole of a reel (reels 1 to 3) have the chance to become fully wild.

In addition to this, there is a Free Spins Bonus feature. To get this, you will need three bonus symbols. They appear on reels 1, 3 and 5. You will get 8 free spins! A giant squid may appear during these spins, turning various symbols into ‘sticky’ wilds. This means they will stay in place for the rest of your spins!

As mentioned previously, Nemo’s Voyage is the first game from WMS to be built on the Phantom EFX engine. This is an engine, designed by the company, especially for mobile and ‘social’ games i.e. Facebook.

This means that the games built on this engine will run fantastically well on all supporting mobile devices (Android, iOS etc.) So, if you are planning to play on a mobile device, then you aren’t going to find a better game to get started on than Nemo’s Voyage Slot!

That is never fun. Instead, you will need to keep an eye out for features which do pop up from time to time. In addition to this, it is a game which loves to reward you the more you play. We like games like this.

It makes us feel like we are working towards something. For that reason, the game comes highly recommended from us here! You can play the Nemo’s Voyage slot machine on any website which offers WMS games, but have a look at our top casino site recommendations below!