Microgaming’s Game of Thrones Slot Machine won’t disappoint both GOT fans and slot fans alike.With the choice to play 243 ways or 15 pay lines, take yourself to the land of Westeros and ask yourselves: Which house will you serve?

Games of Thrones is a dramatic online slot, which is a collaboration between Microgaming and HBO, the series' creator. But, let’s not forget that the incredibly successful television series is actually based on George RR Martins’ ‘A Song of Fire and Ice’ novels.

Microgaming has successfully captured the drama of Game of Thrones and come up with a thrilling and awesome looking online slot, which offers users unique features and an unconventional pay line structure.

How to Play Game of Thrones Online Slot

To get started, pick an online casino which offers Microgaming slots, such as our recommendations below and load the game. You’ll instantly hear the soundtrack from the TV series, which will get you in the mood of what’s to come: The battle for the Iron Throne!

Game of Thrones Slot is designed with 5 reels, 3 rows and a choice to play with 15 pay lines or the 243 ways to win version. The 15 pay-lines is quite self explanatory, where the 243 ways to win is is completely novel and unique to Microgaming. 243 ways to win simply means that you are only required to spin matching symbols on adjoining reels and not on fixed pay lines!

Design wise, the slot is very 'Games of Thrones’: it’s dark, it can be brooding so don’t expect anything colourful and vibrant. This is Game of Thrones after all, where epic battles are being fought for the land of Westeros, the only question is, which house will win?

On the reels, there are the standard playing card symbols J,K,Q,A and also shields depicted for each house and their coats of arms. There’s also the Iron throne symbol there too.

Game of Thrones online slot game will certainly please fans of the original hit TV series and Novels alike. During game play, there’s many animated cut scenes from episodes in the series, which really adds to the drama of the game as a whole; there’s detailed and impressive animation which summons up all kinds of emotions for the struggles of leaderships in the Seven Kingdoms of Westeros.

Bonus Rounds and Extra Features in Game of Thrones Slot

Without a doubt, the Game of Thrones slot is packed to the brim of entertaining in game features and as we said before – snippets from the series itself, so it’s not short on the entertainment front.

Stacked Wild Symbols: These are depicted as the Game of Thrones logo symbols, which are actually the wild symbols. These symbols act as substitutes for all other symbols, which in turn, allow you to make more winning combinations! They can also be stacked on the reels (stacked wilds), which means that they can cover all spaces a reel and is there the big wins are hiding!

Scatter Symbols: The Scatter symbols are depicted by the iconic and imposing ‘Iron Throne’. This symbol helps to payout prizes, no matter where they’re appearing on the screen. They're also the main trigger for the free spins bonus round, which we’ll explain below:

Four Free Spins In Game Features: There are actually a total of four different free spins bonus features available when you play Game of Thrones casino game. Each of these 4 different options offers its own advantages of course, which can award you with up to a total of eighteen free spins and a bonus multiplier of up to x5! When you get this round, just play and see what you’re rewarded, with the extra prizes added to your balance at the end of the round. 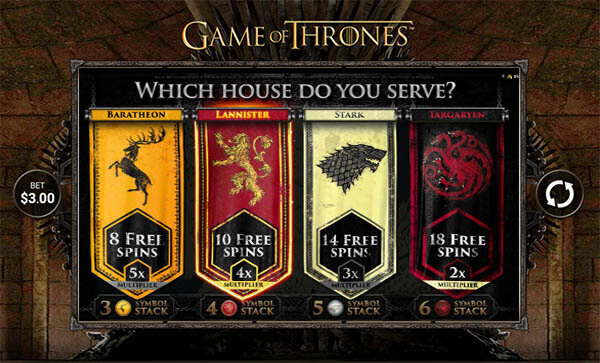 For casino players who love to play online slots and casino games on mobile and tablets, then you’re going to love Game of Thrones Mobile slot.

It features the same dramatic scenes and in game bonus rounds, not to mention the smart soundtrack that will really put you in the mood to watch the TV series.

Choose to play 25 pay-lines or the full new innovative 243 way to win; that’s your choice, but one thing’s for sure, Game of Thrones Mobile slot doesn’t lose any of the excitement factor on the small screen.

Summary – What Do We Think of Game of Thrones Slot?

Game of Thrones Slot game is another epic and legendary Microgaming branded game; it doesn’t fail to do the brand any justice. We tried both the 15 pay-line and 243 ways to win structure and preferred the latter, a little more pricey but all the more thrilling. Granted, Game of Thrones online slot machine can be serious, dramatic and dark, but that’s nothing different from the series is it?

You don’t need to have watched the series to enjoy this Microgaming video slot machine, but one thing's for sure, if you play Game of Thrones casino game, you’ll end up watching the series, we can count on it! Play now at one of our recommended Microgaming casinos, each of which offer the best Microgaming bonuses and free spins.

Where To Play Game of Thrones Slot