Hot as Hades Slot will take you on a mythical journey: cartoon style! This Microgaming slot is full of extra features and awesomeness as it takes you into the lair of Hades, the ancient Greek god of the underworld, on a Quest to find the Crystal Helm but the twist is: Hades is a fun and entertsining super hero!

Hot as Hades Slot is an online video slot by casino superkings: Microgaming. Known for their attitude of quality over quantity, it's clear that they release slots less frequently, but when they do, they do it to a to a very high standard, and Hot as Hades is no exception.

Hot as Hades is set in another time and ancient land, and will takes you through mythological stories of Zeus, Poseidon and Medusa, all combined together in one theme to include Hades as well.

Hot as Hades Slot is a very cheeky and entertaining slot, and suprisingly. which will have you laughing along with this unlikely hero. Hades may the the god of the underworld but in this slot here's here to help you win cash, from the many extra features,such as free spins games, multi-tiered bonus structure and many wilds, some of which are sticky.

How to Play Hot as Hades Slot 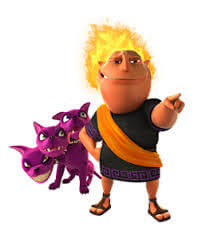 Microgaming's Hot as Hades Slot is designed with 5 reels, 3 rows and a total of 20 fixed pay lines. The story of this slot is a mix of tales and themes from Zeus, Poseidon and Medusa, expect to see Hades himself, with fiery hair of course!

Hot as Hades graphics are something special. They’re clear, crisp and really realistic, especially when you start seeing boiling lava, when you take a trip into Hades lair, which come complete with fireballs of explosions to really set the scene.

On the reels, you'll find God like icons, including Medusa, Poseidon, Zeus, and also Cerberus, Hades' three headed dog, and some standard A to 10 symbols that are common in most online slots.

What's really entertaining is the extra fun animations you'll see during your game play, such as Cercerus pee-peeing on the side, to Hades juggling some gems. Its just a fun touch that adds to the very charm of playing this slot.

Hot as Hades Slot can be played from £0.20 to £50 a spin, and is considered a medium variance slot, which also has around a 96% return to play ratio, which is average, if not a little higher, for all Microgaming Slot. See Hot as Hades Slot settings to how you prefer to play and within your preferred betting limits, and get started on this fun mythological adventure!

Quest for the Crystal Helm Feature: You can play this feature when you land 3 or more scatters anywhere on the reels. It's here where you can 'reclaim' the Crystal Helm, which is being guarded by Hades brothers. You'll find that there are 5 levels which you can start playing, which you can pass, one at a time, which a single chance to do so, granted for each level. Here's a brief summary of what you can expect to find on each level:

Free Spins Feature: The second cool bonus games on Hot as Hades is pretty much a free spins game, featuring Sticky Wilds. When we played, it did trigger more often that the Quest for the Crystal Helm feature (above), and it will randomly trigger during game play. When it does, the reels will turn into a super mode.

Here, you’ll be given 5 free spins featuring Sticky Wilds for some extra fabulous hot wins! Of course, going with the notion of this fun slot, during this feature, you'll see Hades himself flying out of the reels, flying around a bit and then shooting the reels and so on, to turn some of the icons on the reels in to sticky wilds. See? He's helping you win more money. What a hero!

Good news... for all mobile casino loving patrons. Hot as Hades Slot is available for you to play with the freedom of anywhere which graces you internet coverage. Hot as Hades Mobile Slot is available on most devices from mobile phones to tablets, which Microgaming have done a great job in adapting, to be fully responsive for touch screen devices and mini screens.

Hot as Hades Slot is full of fun and cheeky gimmicks which will keep you entertained. It's clear that Microgaming really put 100% into the thought process to create a visually stunning an fun video slot, which features some real adventurous game extras to help you win more.
Hot as Hades Slot is a perfect slot for all types of casino players, from players who like to go easy and bet from £0.20 a spin, to those who like to go a bit more 'full throttle' on the stakes with a large £50 a spin. Since Hot As Hades it a mid-variance slot, it won't eat too much of your bank roll before you start winning some coins as well.
All in all, Hot as Hates is a new favourite slot of ours, that we can add to our playlist. It's fun and entertianing with plenty of hidden extras in there, to help you win more money. Play now at a recommended Microgaming casino below and scoop some of the best casino bonuses online while you're at it!

Where To Play Hot as Hades Slot