Microgaming are known for bringing us high quality, profound themed online slots and this duo of slots is no different. Titans of The Sun is not just one slot you see; you have the choice to play 2 slots within the same theme which are really part of a 2 story saga between the gods: Titans of The Sun Theia Slot and also Titans of The Sun Hyperion Slot.

How To Play Titans of The Sun: Theia Slot 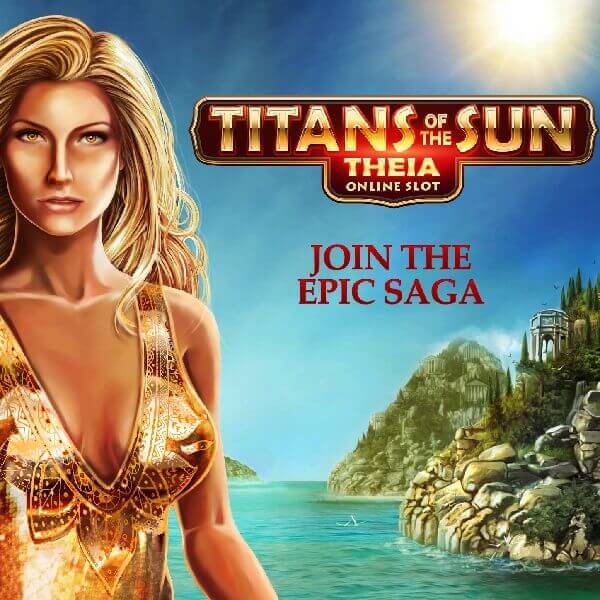 Titans of the Sun Theia Slot is the female version of the duo hero slot. Set with a backdrop that is the shining Mediterranean, with glistening seas,

Microgaming has designed Theia with 5 reels and 15 pay lines. Graphics wise, it’s top notch and offers high grade 3D graphics. On the reels, there are icons on the reels including Unicorns and fiery flying Phoenixes and of course, the goddess herself: Theia.

Bonus Rounds & In Game Features: Titans of the Sun Theia Slot offers a lot of extra features to keep you entertained. The slot notably features a Mystery Symbol which is where all symbols can morph into 1 chosen symbol (A bit like Netent’s Colossal Symbols in Spinata Grande Slot’) to cover large sections on the reels.

This is where the prize money can come in, as you can get wins of up to 1,000 x your stake! What’s more, Titans of the Sun Theia Slot also features a Free Spins feature. You can get 15 free spins with a nice twist that wins are doubled with a x2 multiplier.

How To Play Titans Of The Sun: Hyperion Slot

Titans of the Sun Hyperion Slot is very similar to the Theia version, again with 5 reels and 15 pay lines, again set in the same sort of ancient Greek surroundings. This time on the reels, you’ll see Hyperion himself, unicorn symbols and a shining sun symbol.

Bonus Rounds & In Game Features: The Hyperion symbol can be stacked on all reels with adjacent icons for big wins, and also expect to see Hyperion stacks, which can also transform into Mega Symbols for notable wins, just like you’ll see in the Theia version of the slot.

Hyperion’s main feature which is really rewarding is without a doubt the Free Spins feature. You can trigger the free spins feature by landing 3 or more scatters – get these and you’ll be credited with 15 free spins.

Unlike Theia slot however, where your winnings are given a x2 multiplier treatment, there are no multipliers for the free spins in the Hyperion version, but they are re-triggerable, so that’ll also help you land those monumental wins anyway.

Both slots are graphically perfect and feature state of the art HD graphics which really make the playing experience to be top quality. As for win potential and how the slots behave, it’s said that Titans of The Sun Theia & Hyperion Slots both offer high variance qualities.

So bear this in mind when playing or choosing this slot to play, as you could see some dry spells when playing, but when you win after some time, you’ll win big! Although Theia Slot is practically identical to the Hyperion version, Titans of The Sun Theia Slot has a bigger win potential and does have slightly different graphics.

Titans of The Sun Mobile Slots

Both versions of the Titans of the Sun Slots are fully functional on tablets and smart phones with touch screens, the graphics look amazing on both. Titans of the Sun Mobile Slots are well worth playing on mobiles and tablets, as the mobile slot version lack no details from the main desktop counterpart.

Did Microgaming need to make 2 slots instead of 1? We’re not convinced, but they are both worth playing. Titans of the Sun Slots are really high quality and offer the Microgaming characteristics of looks and graphics. It’s nice to see that Microgaming have decided to incorporate some new and interesting in game features into their slots, such as the Mega Symbols, which we mentioned earlier and are rather like Netent’s ‘Colossal Symbols’.

Titans of The Sun Theia and Hyperion Slots both offer huge win potential but border on the high variance side of things, so do bear in mind that wins could come slowly but the wins themselves will be worth the wait.

Try Titans of The Sun Slot saga at our recommended Microgaming Casinos below, each of which offer the best casino bonuses and free spins offers for new customers.

Where To Play Titans of The Sun Slots