Asgardian Stones from NetEnt is the latest game from the Swedish-based company. Is this game everything it is cracked up to be, or does it leave something to be desired? Let’s look!

How to Play Asgardian Stones Slot

Asgardian Stones is a 5 reel, 20 payline slot. The minimum bet is 20p and the maximum is £200. This is very much a ‘typical’ NetEnt slot with a medium to high volatility.

Asgardian Stones is another game based around Norse Mythology. Only this time, you are going to be combining it with Greek Mythology for some obscure reason. In fact, it is so obscure that I am not too fussed about that. Plus, who really plays games like Asgardian Stones for the ‘storyline’? I know I don’t! All I care about is that the game is fun and that it looks decent. As you will be able to tell in a short while, this is a game which is certainly a whole lot of fun to play.

As with many NetEnt slots, this is a game which has been designed for newer players. Anybody could boot it up and know exactly what they are doing within a coupler of seconds.

While there are a few features, most of the game is just you hitting the spin button and waiting for those features to play it. It may not seem like the most engaging thing in the world, but I swear it is. You always get a sense of excitement when you hit that spin button again, and that is exactly what we want to see in a slot.

The bulk of the game is based around the avalanche feature. If you have ever played a NetEnt slot before, then you will know what this is about (many of their recent popular games, including Gonzo’s Quest, boast this feature). You spin the reel. If you get a winning combination, the symbols will disappear and new ones will fall into their place…like an avalanche!

This means that you could feasibly win multiple times on a single spin. In fact, here at All Gambling Sites, this is how we won most of the games when we played Asgardian Stones.

Of course, it does mean that there will be long periods where you do not win anything, mostly because there needs to be some sacrifices to allow somebody to win multiple times on one spin. That is just the way slots work.

In addition to this, there are colossal symbols. Every symbol in the game, bar the wild, can come in a colossal form. Again, this is a feature which can be found in other NetEnt games. The symbols come in 2x2 or 3x3 blocks. This helps to lead to more wins.

Of course, this is not the only benefit of the colossal symbol. In rare cases, the symbol can appear during the avalanche mode. If this happens, it will come down and can crush the symbols below it. It can crush multiple rows. Each row it crushes at +1 to the multiplier, with the maximum being a 4x multiplier.

The final feature is free spins. You can active this by getting three of the scatters. You will then be taken to a mode where you can earn up to 245 free spins. Colossal wilds can appear here, which is nifty. 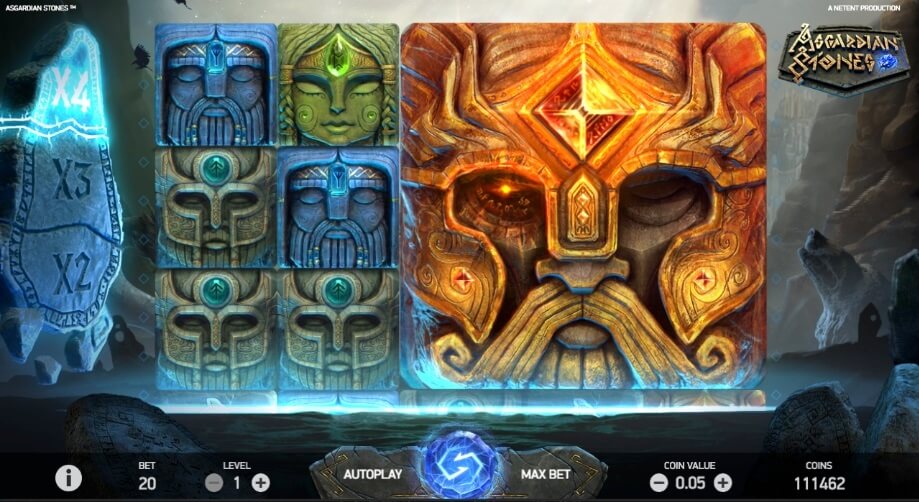 Asgardian Stones is a NetEnt slot. This means that it should probably go without saying that this is one of the best mobile slots around. However, we are going to say it because we are surprised at how many people out there have never even so much as booted up the joyous experience of a NetEnt mobile slot. These games are good. I mean…really good. We are talking better graphics. Smoother gameplay. It is awesome!

If you are looking for one of the best new slots around, then Asgardian Stones is where it is at. This game is epic to say the least. It looks good, and it boasts a surprising amount of features for a ‘beginner’ slot. It is not really breaking any ground with these features, all having appeared on other NetEnt slots. It is nice enough, though. Check it out on one of the top NetEnt casinos listed below.

Where To Play Asgardian Stones Slot