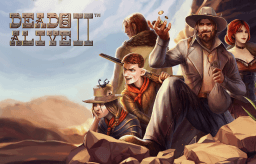 The original Dead or Alive slot is by far one of the most popular slots in the world. Despite being over a decade old at the time of writing, the game still somehow manages to dominate the ‘most popular’ lists of some of the best casinos in the world. It should come as no surprise that they decided to make a sequel.

How to Play Dead or Alive 2 Slot

So, let's get one thing clear about this 'sequel' if you like. No...Not quite like the original but close. If you are expecting to jump into the Dead or Alive 2 slot expecting it to be like the original, then you have another thing coming. While there are going to be elements which are going to be hitting you with a wave of nostalgia, the vast majority of the game is completely different.

For starters; this game has had a complete graphics overhaul. While the original relied heavily on its retro stylings, this game is in full HD and looks impeccable. You must also remember that Dead or Alive 2 was designed to be used on mobile devices. The original wasn’t. While it eventually did get a mobile upgrade when it converted to HTML5 (much to the disappointment of a lot of players), the game never really felt right on mobile. This one does.

The artwork here is impeccable, and you are going to fall in love with the brilliant visuals that Dead or Alive 2 slot boasts.
The game does keep some of the ‘features’ of the original. The RTP of 96.8% is the same, and the 5-reel, 9-pay-line setup is the same too.

Outside of your standard wilds, there are three features in the game. All of these are tied to free spins. So, if you love your free spins then Dead or Alive 2 is the absolute best place to play. The best part is that you get to choose which free spins feature you get to play once you are lucky enough to net yourself three scatter symbols. Each of them has their own pros and cons, and you will very quickly find that one feature, in particular, hits your play style perfectly:

Train Heist: with this, the multiplier will increase every single time a wild hits the reels. You will also get one extra free spin per wild. If you get a 16x multiplier, you get five additional free spins.

Old Saloon: this is a feature which appeared in the original Dead or Alive slot. All wins during this game will give you double the payout. Any wilds that you are lucky enough to score will be locked into place. If you end up with five wilds on the screen, you will get five extra spins.

High Noon: if you love high volatility (which means high prizes, but high risk), then high noon is the way to go. However, you can make up to 100,000x your stake here…which isn’t too shabby.  The rules here are much the same as the Old Saloon feature, but the wilds will also be multipliers. So, two wilds will give you a 2x multiplier, but throw in a third and they become a 3x multiplier. So, lots of money here. It doesn’t pay out often, but boy, when it does…you, are going to love it.

Now, an area where this game is the same as the original is RTP % and variance. The original is famous for being a highly volatile slot with a 96.8% RTP. Yep - it's exactly the same as the first, and with a highly charged theme - we think that it makes sense. Don't forget in the High Room feature you can make up yo 100,000 your stake, thanks tot he many multipliers and Wilds to be had, so definitely lookout for that one.

As we said, unlike the original Dead or Alive slot, this game has been built from the ground up to be compatible with mobile devices. While the graphics are somewhat on the more ‘sophisticated’ side than the original, it plays so much better. There is so much detail and colour in the game. The graphics look incredibly crisp too. You are going to enjoy playing it. In fact, this is one of our more favourite mobile games in recent years.

If you are diving into the Dead or Alive 2 slot expecting a replacement for the original then you have another thing coming. It doesn’t do that. Instead, it is a completely new game that is fun to play, albeit with elements of the original in there to get you thinking back to days gone by. This game is fully recommended, but we reckon that you should play the original game too. We reckon that you are going to have a ton of fun with both. Check out the list of casinos below if you want somewhere to play it.

Where To Play Dead or Alive Slot