The Phantom Curse slot from NetEnt is the next ‘entry’ in the Universal Monsters line, and we reckon that it is one of the best that they have produced, maybe not from a graphics standpoint, but certainly when it comes to gameplay.

How to Play The Phantom Curse Slot

The Phantom's Curse is a 5-reel, 40 payline slot from NetEnt. The minimum bet is 20p per spin. The maximum is £200 per spin, so roughly in-line with the other slots from the Universal Monsters range.

Obviously, this game is a 're-make to the Phantom of the Opera slot machine that Netent first announced last year. This is actually one of the most anticipated slots as of late from the house of NetEnt, mainly because it seemed to have disappeared into a black hole. The game was announced for release and then nobody heard anything for about six months.

Honestly, I can’t think of any reason why the game would have been delayed aside from the fact that Microgaming released their own version of The Phantom of The Opera Slot (based on Lloyd Webber's musical). Not ones to be outdone, Netent went back to the drawing board; and here we are with a brand new title and .. the same story. Yes, it's just a rebrand of the Netent Phantom of The Opera Slot we reported last year.

So, onto the finer details. The game does not look particularly amazing. You have an opera house as the background, then some symbols on the front. In my opinion, they are not particularly well-designed symbols either.

The background artwork is epic, but you can’t help but get the feeling that the rest of the art was rushed. This probably had something to do with the delay. Nonetheless, the game is not about the graphics anyway, it is about the gameplay, and there is plenty of that to boot.

There are three features in this game that you will encounter:

Masked Phantom Re-Spin: with this feature, you will trigger an automatic re-spin whenever you get a stacked phantom symbol on the 1st reel and a stacked mask symbol on the 5th reel. These symbols will turn wild and remain stuck in place for a single spin. Of course, this is not a feature that you can expect to trigger all that much, mostly because the stars will really need to align for you to get two stacked symbols lined up like that.

Free Spins: this game has a free spins mode. 3 chandelier scatters (can only appear on the 1st, 3rd and 5th reel) will give you your free spins. The free spins are virtually unlimited. Just like the previous game, there will be a chandelier hanging above each reel. Each time you get a phantom symbol on that reel, the rope will be cut. When a rope is cut, the masked phantom symbols on that reel will be fully stacked. When all five chandeliers have been cut, the free spins end.

Pick and Click: reel 1 phantom symbol and Christine symbol on reel 5 will give you a pick and click. The first will give you one of 8 cash prizes, and the second part of the feature will multiply the prize between 1x and 3x. 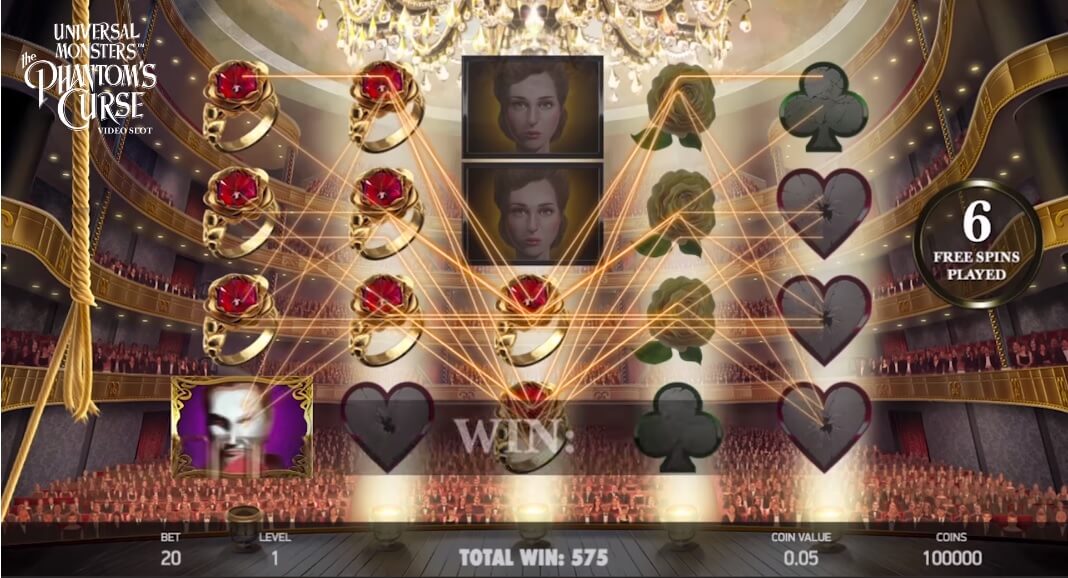 The Phantom's Curse mobile slot machine is just as you would expect from NetEnt…quality. As I mentioned previously, the graphics are not the best in the world, and I know that NetEnt can do so much better than what they produced here, but they do look good on mobile devices.

They have a bit of clarity to them. They are brightly coloured and certainly pleasing to the eye. Couple this with the fact that the game is incredibly smooth to play and you will enjoy it.

Graphics aside, this is a tremendous game to play. Sure, it does not have a whopping amount of features, but the game is a decent follow-up to the original slot.

In fact, it is better than the original slot. As mentioned at the start, this is probably the best game that has come from the Universal Monster’s range of slots as of late, which only leaves us excited for what NetEnt will bring in the future (assuming that they will continue with this game line)

To play The Phantom's Curse slot machine, you will need to head to a website that offers NetEnt games. Thankfully, they are not too tricky to find. What are tricky to find, however, are NetEnt sites which are fun to play at. This is why the team here at All Gambling Sites have been working exceedingly hard to put together a list of some of the best online casinos around. Check them out: