Pink Elephants is a bit of a weird slot. The name makes it seem like you are going to be diving headfirst into one of the cutest slots ever. You aren’t. Sure, there are elephants, but the look of this machine is anything but ‘cute’. It is pink, though. We give it that.

Pink Elephants is a Thunderkick slot first released in October 2017. It offers 6 reels and 4096 ways to win (mostly tied to the free spins). The house edge is 3.9%. This is a medium to high volatility slot. The minimum bet is 10p per spin and the maximum is £100. If you bet at the maximum, you may be in line for the maximum win of £820,00.

It is hard to describe the look of the slot. There are pink elephants, I give it that. However, this is more about a ‘dreamlike’ state. The animals that appear aren’t really the focus.

While I do love the art style of the game, I do have a massive issue with the fact that everything is so pink. Yeah. I know. You should expect pink from a slot called ‘Pink Elephants’, but I wish it had more colour options. It is a Thunderkick slot and they normally know how to make something look awesome, so they have let me down here.

If you love your free spins, then this is the slot for you. The game loves to throw free spin after free spin at you. We will take a look at that soon. The simplicity of the slot means that newcomers should be able to enjoy the slot too. In fact, it is nothing more than hitting the spin button and hoping for those wins to roll in.

As with all other slots out there, Pink Elephants offers a Wild. The purpose of this wild is to act as a replacement for every other symbol in the game. It pops up often.

On each spin, there is the possibility for a random scatter to appear. Well, several, which will be dropped right there on the reels to award you free spins. That being said, it did not pop up anywhere near often enough for us when we played, and even when it did pop up, it never really dropped them in a quantity that would enable us to receive free spins. Bit of a shame, to be honest.

As with all Thunderkick slots, the mobile version of Pink Elephants is awesome. It loads up ever so quickly, even on the slowest of internet connections. Couple this with the beautiful look (if you can get past all that pink), and you have a slot that is decent. Many of the team members here at All Gambling Sites do not play on our mobile devices, but we are willing to make exceptions for games that are of a high quality like Pink Elephants.

The bulk of the ways in which to win will come from your free spins. You will need to score between 3 and 6 scatters to net yourself either 7, 11, 15, or 19 free spins. For every 2 additional scatters you get on the reels, you will be offered a further 3 spins.

As you play through this game mode, you will notice that there will be some symbols which have little orbs attached to them. You collect these orbs. When you have 10, one of the symbols on the reels will be changed to the highest paying symbol in the game. This could net you huge amounts of cash. 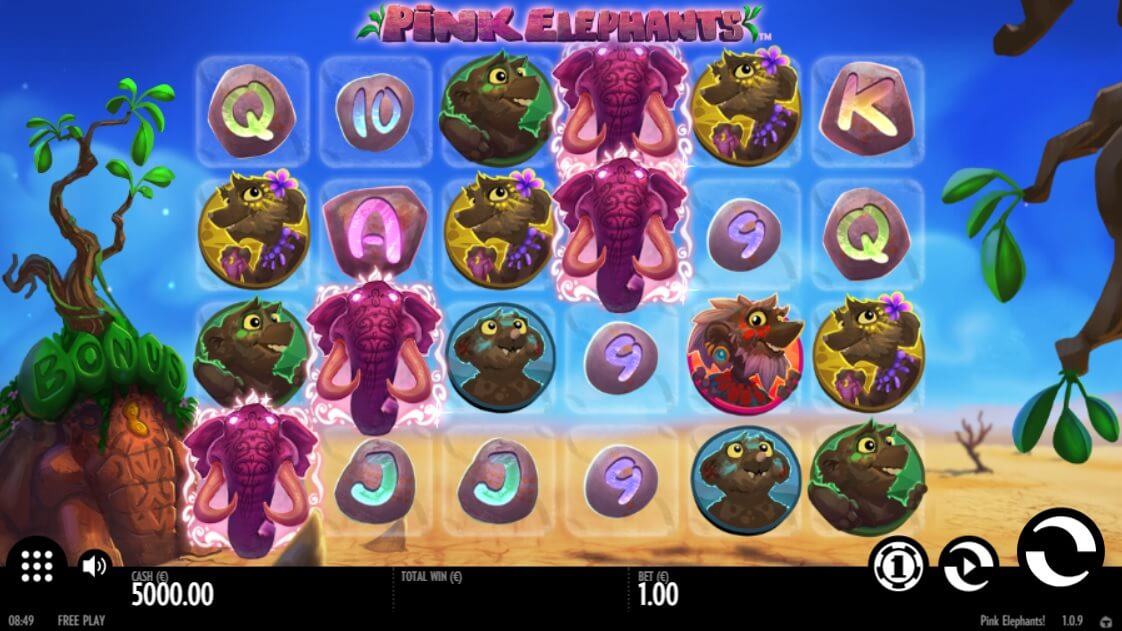 If you can get past the aesthetics of the slot (yes, I know, there will be some people who love the look of Pink Elephants), then you have something that is engaging. It is not necessarily brimming with tons of features, but what is here is awesome enough to keep you entertained for a long time. Although, let’s be honest, did you really expect anything less from Thunderkick?

If you want to play Pink Elephants, and I am sure you are itching to do so because you know Thunderkick produces some epic slots, then head to one of the sites listed below. These have been checked over by our team. We truly believe that these are some of the best online casinos in the United Kingdom.