Love games that are brimming with features? Then the Alice and the Mad Tea Party game from WMS is just the thing for you! There are seven in the game, and each of them much more exciting than the last (not exactly true, they are an equal level of excitement, but they are great!)

How to Play Alice and the Mad Tea Party Slot 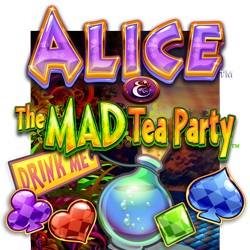 Those who know WMS will know that the company is not all that large, not when you compare them to giants such as Microgaming and NetEnt. For that reason, WMS have to work hard to stay relevant. This means creating unique slot machines, and there is no slot machine theme more unique than Alice in Wonderland. I mean, the whole of that story has been built upon the idea of being quirky.

On the Alice and the Mad Tea Party slot machine, there are 30 paylines across five reels. The minimum bet per spin (assuming you will be playing all paylines) is 50p and the maximum bet per spin is £100. This is a good range of bets for both newcomers and experienced players in the world of slot machines.

This game, as you may have guessed, is all about Alice in Wonderland. As a result, the graphics are quirky. Now, we would say that the graphics are delightful, but that would be a bit of a lie. They look great, but on some screens they look highly pixelated and, as a result, are not all that joyful to look at. This changes when you boot the game up on a mobile device but other than that, they just do not look good at all. This is a huge shame as the images do really look decent. I am hoping that WMS give this machine an upgrade in the future.

Other than this, I have no real issues with the overall way in which the slot machine plays. In fact, despite the uniqueness of the game, it is pretty simple to understand! You just have to select the amount you wish to bet and, let’s be honest, that isn’t a hard decision.

There are several features to be found in the Alice and the Mad Tea Party slot machine. Five of these are randomly triggered:

Caterpillar: You will get a multiplier of 2x-10x or 15x.
Queen: Instant cash prize of between 50x and 250x your initial bet. The Queen symbol will start to appear on the reels. This will be a wild.

Cheshire Cat: Up to 10 symbols will randomly become wilds.

Alice Feature: up to five of the reels will become fully wild.
There are also two other features which can appear in this game:

Super Mad Respin Feature: You will need to get three of the ‘Alice’ symbols in the game. You will be able to earn up to seven respins during this feature.

Mad Tea Party Free Spin Feature: Six free spins will be awarded. You will be asked to select symbols which will give you a multiplier. 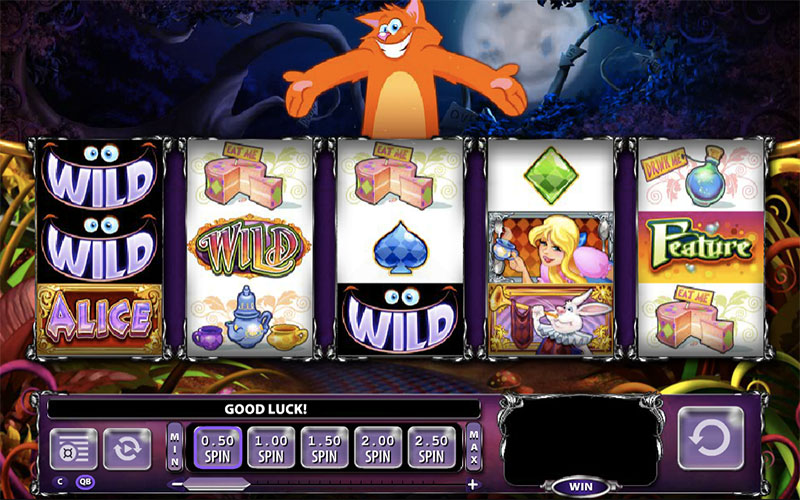 As mentioned previously, this game looks a whole lot better on mobile devices. This is due to the way in which the images have been designed. Therefore, if you are going to go down the route of playing this slot machine, then you should always try and play the Alice and the Mad Tea Party mobile slot machine instead. It is far superior to the desktop version.

This is a unique slot machine. With seven features that can pop up at any time, it is something that is genuinely going to keep you engrossed. Understanding what each feature does right at the start can be a touch confusing. WMS guides have never been the best in the world, but after they appear a few times, and they will appear, then you will start to get into the swing of things. Alice and the Mad Tea Party slot can only be played on websites that offer WMS games. We know that they can be a touch tricky to find, which is why we have put together a collection of suggested websites that you can head to.