With a Football frenzy that was World Cup 2019, play Yggdrasil’s great looking football themed slot and make sure you complete come bicycle kicks for some big win opportunities!

Yggdrasil Gaming have been pumping out some epic online slot machines lately, and now comes a football themed slot packed full of fun in game features, top grade graphics and a chance to win up to 190,000 coins.

How to Play Bicicleta Slot

If you are, like us were wondering what this slot is all about before you see the graphics then let us tell you that ‘Bicicleta’ is actually the Spanish word for Bicycle and the slot itself is referring to football 'Bicycle' kicks. If you’re not following there either, then a bicycle kick is when a player does a 360 kick over their head before walloping it straight into the net. It’s Spanish and were not sure why but, if you think about it, it does give a different ring to bicycle, doesn’t it?

To play Yggdrasil’s Bicicleta Slot, then you’ll need to choose an online casino which offers Yggdrasil slots, so have a look below at the best Yggdrasil casinos and take your pick.

Bicicleta Slot offers you an all-round football themed slot, full of stadium cheering and footballers sporting ridiculous hairdos and of course a football cup trophy. Bicicleta Slot is designed with 5 reels, 3 rows and 25 pay lines. Bicicleta Slots’ coin levels range between 0.01 - 4.00 win the minimum bet being £0.25 and the maximum being £100.

Load the slot and set it so you’ll be betting within your preferred betting limits. Now, it is known that Bicicleta Slot is more of a higher variance slot, a bit like Yggdrasil’s other higher variance Vikings Go Wild Slot, so make sure you bear that in mind. You might have to wait a bit longer to see some wins, but when they come rolling – they do in large amounts so be a bit conservative on one’s bank roll.

Bicicleta Wilds: You can’t miss the wild symbols as they’re black and white like the Ref’s colours and they will replace all other symbols except scatter and bonus symbols.

What’s more, if you happen to land another trophy during the free spins round then you won’t get re-spins, you’ll get a reel full of wilds for more win opportunities.

So, Where Does the ‘Bicycle Kick’ come in? During the free spins game, the icons which represent footballers are considered higher value symbols, and whenever these symbols appear on screen, which can happen quite often, they’ll do a bicycle kick to score a goal. If that footballer scores, then that symbol will transform into a wild row, for the remainder of the free spins. If not, then you’ll just spin again! 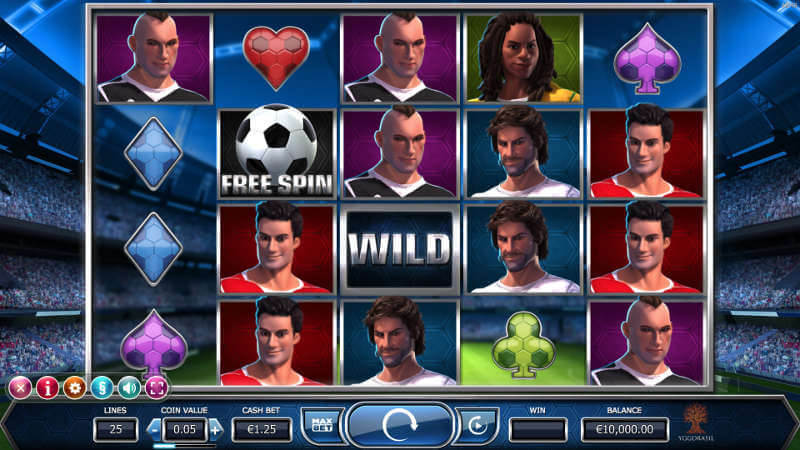 The Bicicleta Mobile Slot can be enjoyed on all smart phones and tablets so it’s really going to be up to you where you play and when you play it.

Bicicleta Mobile Slot is designed well and lacks none of the features if you were to compare it to playing
the desktop version, only you have more freedom to do so. Choose yourself a top mobile casino below and try it out for size.

This is the second football themed slot we’ve reviewed in many months, the other being Netent’s Football Champions Cup Slot. As we all know, it’s highly likely due to the Euro 2016, but it’s nice to know that they differ from each other and both come recommended to play.

Bicicleta Slot is worth a look in if you love football and love higher variance slots. Alternatively, if Football is not your game (ha) and you can’t put up with the theme or stadium cheering, then why not try Yggdrasil’s other similarly designed slot called Viking Go Wilds instead?

Either way, you won’t be disappointed so choose a new Yggdrasil casino below and get started with the best casino bonuses the net has to offer.

Where To Play Bicicleta Slot