Not ones to be outdone with any brand collaboration, it is indeed Netent who’ve beat everyone else to the punch to launch an official "Vikings" Slot. This game will join many other leading branded slots that Netent have procured and secured the rights to, leaving many of us Netent fans delighted to hear that Viking Slot is soon on the horizon

We don’t think that “Vikings” the TV series needs an introduction, but if you haven't watched the television series then you might not get too excited about this game; but we're 100% convined that not only are you going to like it, youll probably end up watching the TV show too!

Sure, there have been many Viking and Norse Mythology themed online slots over the past few years (think Thunderstruck II, Viking Runecraft Slot, Vikings Treasure to name a few) bit none has really been up there on the scale of the official Vikings Slot by Netent.

Vikings is a historical drama television series written and created by Michael Hirst for the History channel. It first premiered in March 2013. This November will also see the next series launch (series 6) which exactly coincides with the launch of Netent's Vikings Slot. Funny that, not a coincidence but amazing planning and execution by Netent.

As far as graphics are concerned, it’s a great looking slot, complete with the eerie mountain backdrpop and long boats out at sea, with symbols on the reels including some charaters from the main cast (Ragnar, Bjorn Floki & Lagertha) there are also War shiel symbols, Runic sybols and also "regular" lower paying symbols J,K,Q,A.

243 – 78,125 Ways to Win
In the base game, Vikings slot is played with a “regular” 5×3 reel design, but this is switched to a new and rather unique 7×5 design during the free spins feature (or “raid spins”-see below) This means that during this feature, that there is an amazing 78,125 ways to win feature!

Other Game Features
Since this is indeed a Netent slot, there are of course a few other features that you will regularly encounter, which are both fun and exciting. Starting with the  “Hotspot” feature; you’ll come across this feature in the main base game whereby reel 3 is illuminated by an electric current. When you trigger a stacked Viking symbol which will cover the 3rd reel) all other Viking symbols will transform into that symbol. Here, the Viking symbols don’t have to connect but they are indeed taken into consideration when wins are evaluated, so there’s definitely some room for huge wins here.

Another cool feature in Vikings Slot by Netent is the “Shield Wall Feature”. You can activate it in the base game and also in the free spins feature (Raid Spins). A cluster of 3×2 or 5×2 mystery shield symbols will appear on random areas on the reels; these shields will reveal a high paying symbol to pay out a decent win.

Vikings Free Spins are actually Raid Spins!
What's more, you will get 7 free spins when you land 3 scatter symbols on reels 3, 4 and 5. During the “raid spins” feature, the scatter symbols have been removed but there’s decent scope for potential large wins, especially with the 5×3, 243 ways to win. The reel set is changed to a setup of 7×5 (78,125 win ways) and the Hotspot reel now covers the three middle reels. 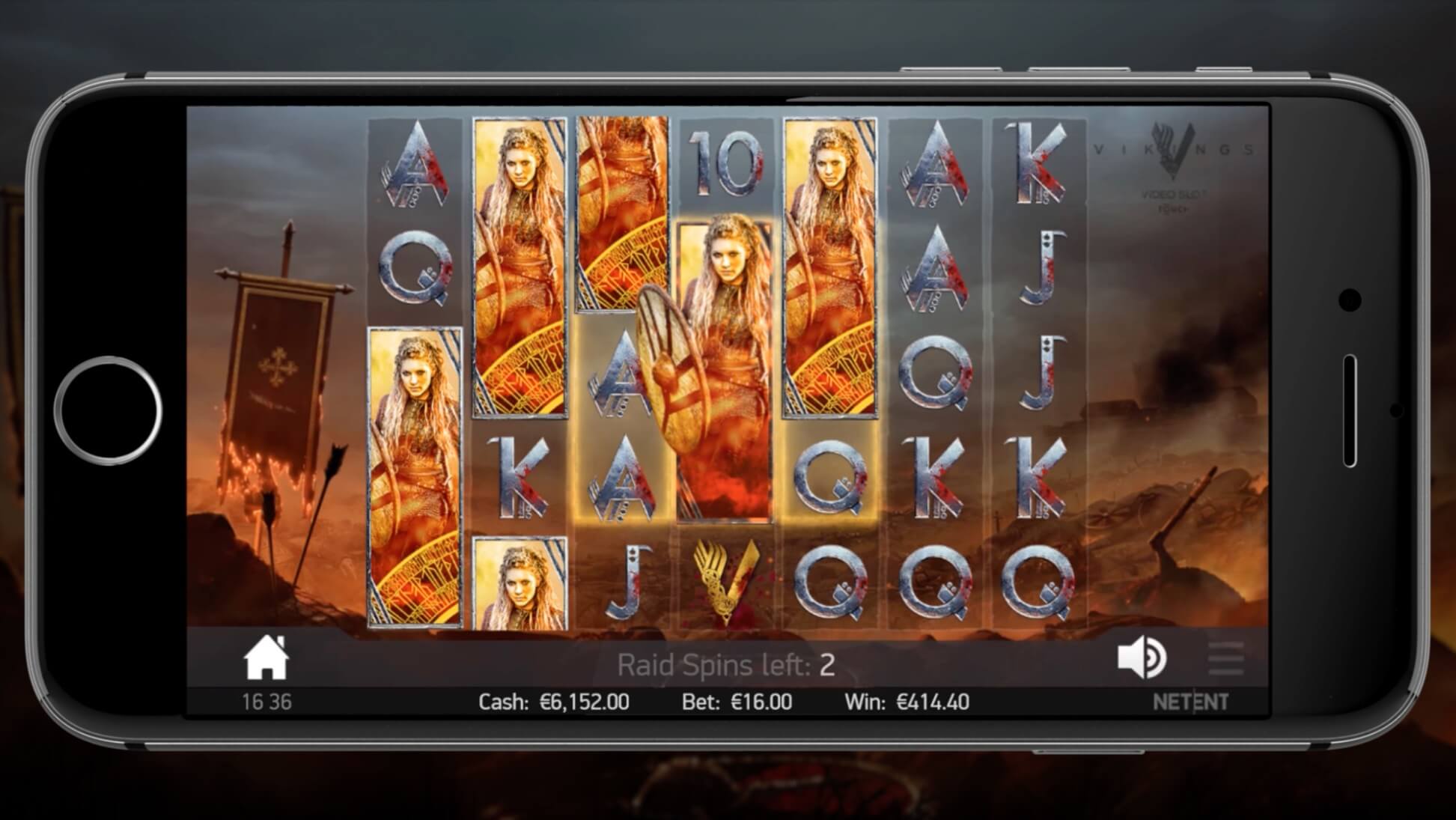 The Vikings Slot Rtp % iss 96.05% which is pretty middle of the road. To have a recap on Vikings, check out the latest trailer for the upcoming new season in November:

Vikings Slot, as like all slots from Netent come ready made in mobile and tablet format and are perfect on the small screen. I’d almost go as far as I prefer to play Netent slots on a mobile or tablet. You will not be disappointed if you plan to play Vikings mobile slot; it's highly recommended!

You will not be disapointed with this game; the graphics are superb, there are plenty of in game feature available including a free spins game, plus plenty of win potential too. You will the best UK Netent casinos which have Vikings slot, below.

Didn't find what you were looking for? New Slot Sites