Starburst is one of the most widely recognised Netent video slots on the market and there's a reason why the original starburst slot is still so popular. The Main reason being is the overall feel of the slot, the look of the easy on the eye graphics: the mixture of vibrant colours in an arcade atmosphere is really compelling for the player. It's almost mesmerising.

Due to Starbursts increased popularity since it's launch, NetEnt decided to have it's very own Starburst Touch edition. Starburst touch is designed for players who enjoy high paced energizing slots. Starburst Touch offers many of the fun features that make game play an experience not to forget, it's really exciting to make you want more and more. It's good news that it's now available on a mobile version.

Starburst Touch Slot features the usual slot game layout of five reels and ten pay lines to play around with. The number of lines, the bet amount and the coin size can all be changed to your own personal preference but if you really want to be a devil then you can bet max and go full throttle for the biggest wins. 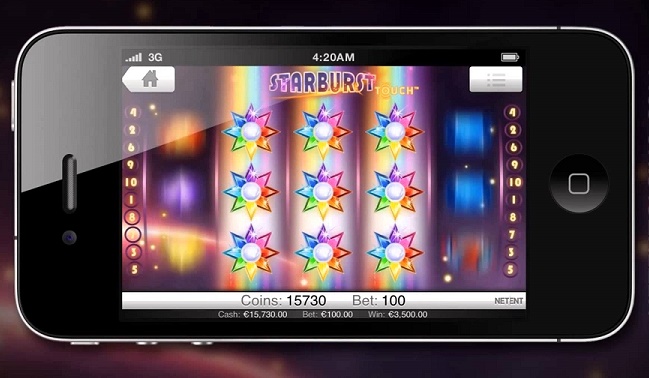 There’s just the one added feature for this game and it’s called the Starburst Wild. Although it’s just one feature, it’s an interesting one that rather adds some much needed excitement to this slot, otherwise you could class Satrburst as one of the more simpler slots on the market. This sparkling Wild will appear as a rainbow anywhere on the 2nd, 3rd or 4th reels and will substitute for all the other symbols on that reel where it appears.

It will also lock down that reel and trigger a free spins rounds (maximum of 3). Don't let the lack of effects and extras put you off, as sometimes, what with all the new wizzing special effect type slots, it's actually quite nice to keep it simple.

Starburst is one of the more simple slots on the market but thats the real charm of this slot as well. It's simple, easy to play and pays out well and often. Sometimes we like to play more complicated slots but when you're in the mood for just some real spinning action on the go, then we recommend Starburst touch.